Slayer unveil the album artwork for their 11th studio album, Repentless, due out 9/11/15 (Nuclear Blast). The artwork was created by Brazilian artist Marcelo Vasco in collaboration with the band’s Tom Araya and Kerry King.

“We had a number of submitted ideas for the cover artwork,“ said Araya. “And we felt Marcelo’s was the best. We made some suggestions and the result is an awesome album cover.“ 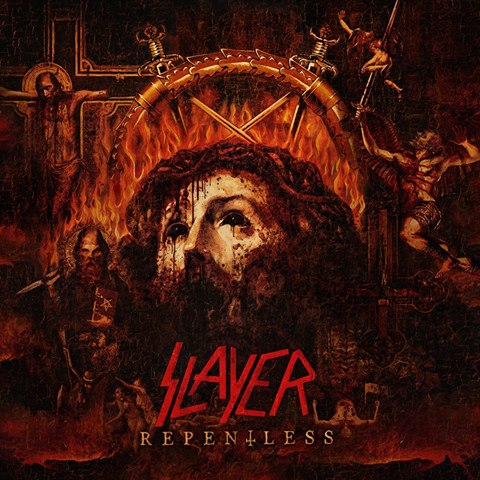 “’Repentless’ is my Jeff tribute,“ said Slayer’s Kerry King. “I call it the ‘HannemAnthem.’ It’s my perspective of Jeff’s perspective, it’s what I think…if Jeff wrote a song for himself, ‘Repentless’ would be it.“

Repentless is Slayer’s first new studio album since 2009’s critically-acclaimed, Grammy-nominated »World Painted Blood«. The twelve songs were produced by Terry Date and recorded between August 2014 and mid-January 2015 at Henson Studios in Los Angeles. SLAYER will tour extensively to support the release of the album, and will headline this summer’s Rockstar Energy Drink Mayhem Festival that kicks off July 26 in San Diego, CA.

The band also announces that the album’s title and first official track will be available digitally virtually everywhere (Amazon, iTunes, Google) around the globe this Friday, June 19.