Death by MetaL is the definitive story of the musical legacy of Chuck Schuldiner – as remembered by those who knew him best.

Chuck Schuldiner vowed to unleash “the most brutal riffs ever, with the most brutal guitar sound ever.” His fascination with metal’s speed and ferocity, matched with an unbending determination to bash out the most savage, boundary crushing interpretation of Heavy Metal ultimately drove him to lead one of the most important bands in Metal: Death.

Not one to be creatively pegged in a corner, Schuldiner’s musical form matured at breakneck speed, juxtaposed with deep, meditative lyrics that would go on to delineate Death from any other band before it, and render it unrivalled by all bands to follow.

Chuck’s boundless musical quest is his legacy and everlasting gift to listeners around the globe. Yet beneath the bellow of his roaring achievements, the prodigious story of Schuldiner’s personal journey has been quietly left overlooked – until now.

Death by MetaL is currently in production, and you can directly support the making of this film by ordering this limited edition shirt featuring exclusive artwork by Travis Smith (The Sound of Perseverance & many more). 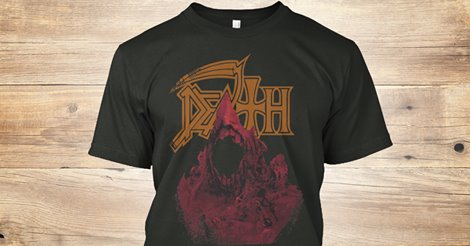 You can directly support the campaign by purchasing this exclusive Travis Smith ‘The Sound of Perseverance’ T-Shirt with all proceeds going to the making of the film!