The first snippet of audio from the mighty Maiden’s upcoming album, ‘The Books Of Souls’ has been released online.

The boys opted for a solo section from one of the new tunes, fetching comparisons with “Somewhere in Time” and “Brave New World” type of vibe from the fans.

As pre-orders for the mammoth double album start today, the metal legends have unveiled a 30-second snippet of new music from the release – complete with an appearance by the menacing Eddie! Check it out below

In one of the previous updates, the band announced that the new album’s lead single, “Speed of Light,” will be unveiled on August 14 as the first song since 1990’s “No Prayer for the Dying” album that was written by guitarist Adrian Smith and vocalist Bruce Dickinson without any creative involvement of band leader Steve Harris. 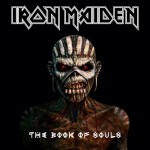 The new album, which was recorded in Paris with the band’s longstanding producer Kevin “Caveman” Shirley, was completed before vocalist Bruce Dickinson had a brush with cancer.

Thankfully, he was given the all-clear from a tumour on his tongue in May of this year. Steve Harris has stated that the band will return to tour the new album at some point next year, once Bruce is fully recuperated and back up to match fitness!

“The Book of Souls” is due out on September 4 via Parlophone Records as a follow-up to 2010’s “The Final Frontier.”