Dear Victor, how are you doing at the moment..?

Thanks, I´m fine! After a long time being on tour I have now time for pushing the pedal to the metal. On Friday I´ll be again in Venray, driving Nascar.

You just finished the tour with Manimal and Orden Ogan in Holland, please tell us how was the show in Arnhem and how the rest of the tour went for you and the other bandmembers..?

The whole tour was really great! It was a very strong package and I´m pretty shure that fans really enjoyed it. For ALMANAC it was the first tour and it´s great to see how professional and easy going are all members. It was absolutely fun to performe the new songs live and see the reaction of the fans. I was really surprised that three days after release the audience has already started to sing the new songs with us. That means that a lot of fans bought our CD before the show and came to see us live. Arnheim was the last show on our tour and we were joking during the last song which we performed together with Manimal. I think that all members of ALMANAC got really great band live experience and this was the best warm-up what we can make before start playing big festivals.

Did you get a lot of new fans with this tour?

Definetely yes! After the show we did signing session and talked to the fans who liked our show and wanted to buy a CD or T-Shirt. 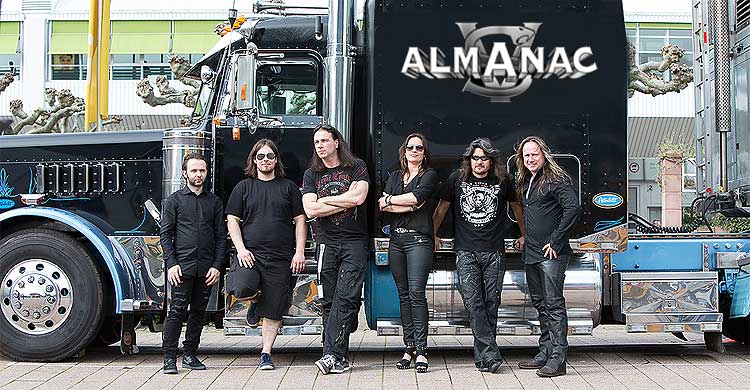 How was it to tour with Orden Ogan they are quite popular in the scene right now..?

This was the first headliner tour for Orden Ogan and I think the guys are quite happy with the result. They toured for many years as support with big names and reached many fans. We spent last half year with Seeb in the studio for recording our ALMANAC CD and Tobias, the guitar player of Orden Ogan, was my guitar student. So, I know the guys and it was easy going on tour.

After the tour…..how things will go on for Almanac..?

The great feedback from tour helped us to get more festival offers and at the moment we start to plan next tour for end of this year. I´m really surprised how band name grow up in such a short time and that we will play some festivals already as a headliner. 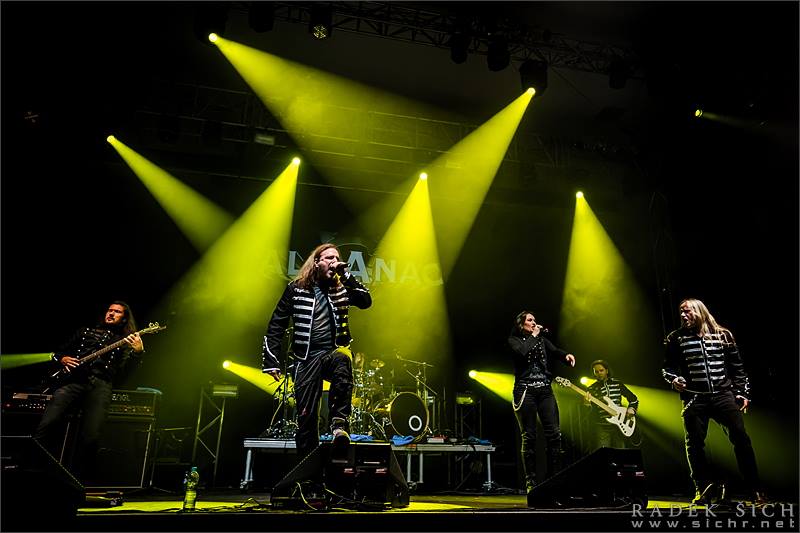 Any other shows-festivals planned for this year?

When I decided I would leave Rage, it was obvious that there would be something new coming… There were several ideas for concepts, but what I really wanted to do was not any kind of project, but a real band, with friends and excellent musicians, where I would have the chance to make music without any compromises and have a lot of fun and enjoy doing so again…

The concept idea for „Tsar“ came up in a meeting with Andy Siry of Nuclear Blast. We were looking for a topic which had a certain kind of strength, but also which was not used on a metal album yet. So we came to Ivan the terrible, a character I find highly fascinating. Of course being from Belarus myself, I have an emotional connection to Russian history, but then also the story of Ivan the terrible itself is a very interesting one. It shows how social and personal circumstances can tragically change a man from a basically good and constructive character to the complete opposite. Additionally, the life span of Ivan the terrible offered so many events which were very dramatic and exciting, which is an important factor when it comes down to writing music to it, and when David Readman and Andy B. Franck, who wrote the lyrics to the songs, told me that they felt similarly and could imagine writing lyrics about the topic, we decided to go for it.

It is quite astonishing for ourselves to look back on the process and see how much we did accomplish in such a short time. To make it happen that fast was possible because everyone involved was really in without any compromises and we were ready to give it the best we have.

Even if it was really a lot of work, we were enjoying ourselves and having lots of fun all the time during the process. I can not remember having laughed that much in any other production during the last couple of years so far. We did work in 8 different studios to be able to get the best results for each element, and also all the crews and technicians were very much dedicated and did their work with a lot of passion, making it the best they can. Same goes for Rainer „Zipp“ Fränzen and his team, who were in charge of all the video work… really pleasant people who love what they do and gave it all they had… 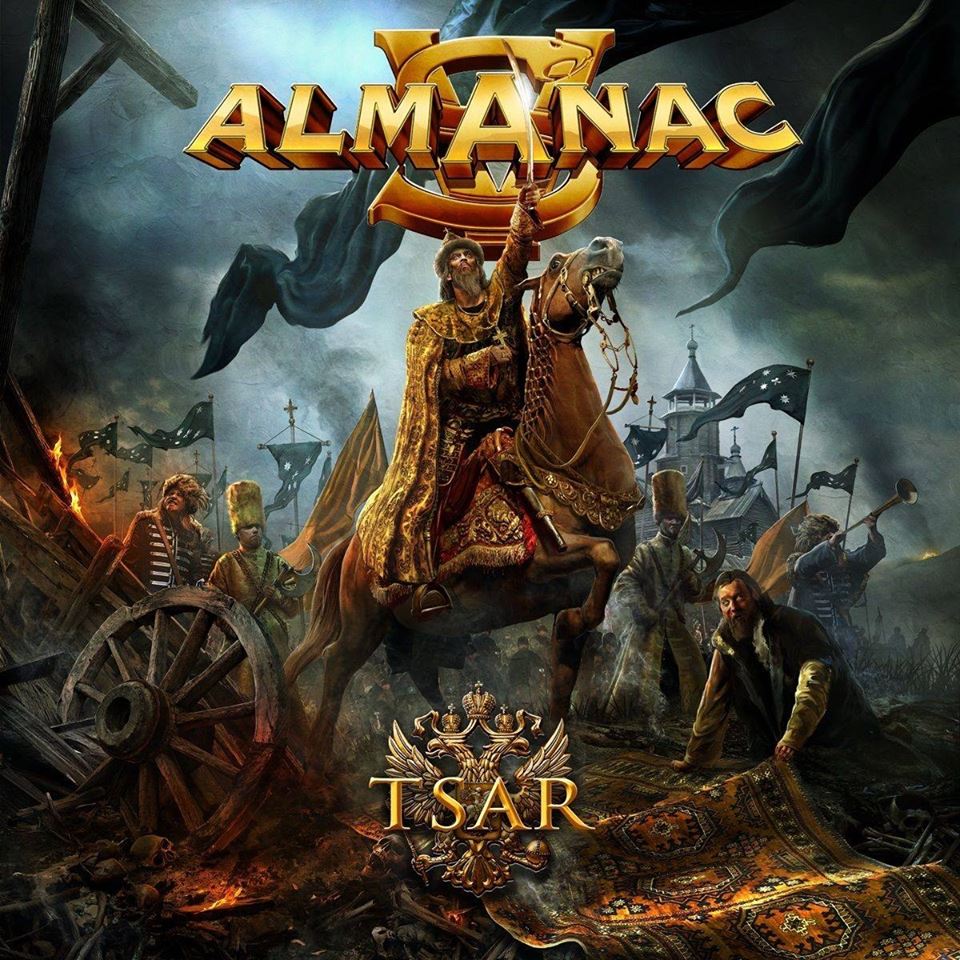 How was the album received by press and your fans..?

It´s the best feedback which I´ve ever got in the last 20 years. The reception by the press so far is really amazing, the album even made the album of the month or dynamit / top 10 polls in some of the magazines and the majority of the reviews are really amazing. It seems like they really like the songs and the power and at the same time the diversity of the album. We also manage to get the point across that Almanac is not a short term all-star project, but a real, genuine band by musicians who love what they do and really enjoy doing it together. This is something which is really important to us and we are very happy that Almanac is percieved by the press this way, since we have many plans and ideas for the future. Reaction from the fans after the shows and on facebook is really great.

The great cover was done by gyula Havancsak, who worked for, Annihilator, Tyr, Destruction etc. It´s relly well done, how did you get in contact with him..?

For the cover artwork of Tsar I´ve contacted a lot of different artists to get the best ideas and these were defintely Gyula´s ideas. He brings all my ideas to the point and it fits perfectly to the concept which shows the power of Ivan the Terrible.

The combination of David Readman and Jeanette Marchewka is really done well and really great to listen to. how did you find Jeannette?

I knew Jeannette from the work on the LMO project. We did a lot of studio recording and live performance together and she fits perfectly to ALMANAC concept. It´s a lot of fun to work with her, because she is very professional and a very kind person.

Do you have other plans, like working with other projects from bands-artists in the near future?

The last years I did a lot of studio jobs like Italian Vivaldi project, international band Voodoo Gods, did a lot of solo shows, recording orchestra for Leaves Eyes and other bands. So, this year I get also new offers and I will try to finish my new solo CD. 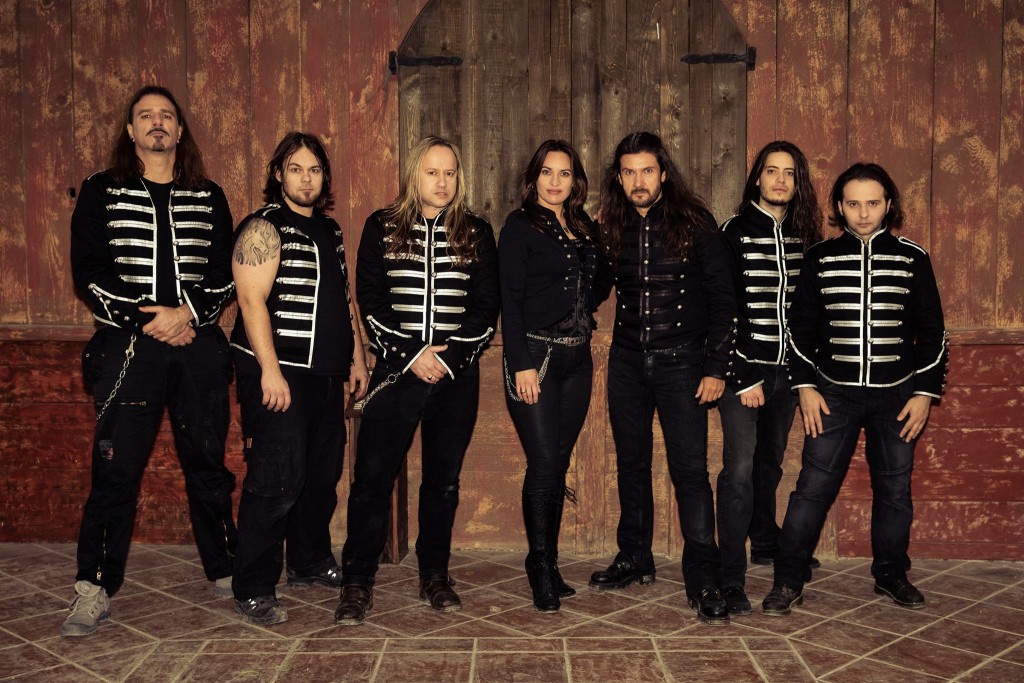 You are from Belarus, Minsk. End of the eighties you went to live in Germany. Was it at that time so easy to immigrate to Germany, if you think of the excisting at that time of the Iron curtain etc..?

I feel like I have two home countries. I like very much Belarus and I feel very comfortable in Germany. Moving to Germany was not easy for me, because you loose the contact to friends and also paper work for immigration was horrible. But I got so many job offers in Germany and also help from many friends. That made it easier.

Your Father, Dmitry, is also living in Germany now? you worked together with him on a composition for a symphony for electric guitar and orchestra. Can you tell us something about it?

My whole family still live in Minsk and they don´t want to move, because they are happy there. My father is still working hard and at the moment his opera is sold out for many years in National Opera Theatre. It was a great experience to compose together with my father and it was his idea. He is a very open mind musician and likes handmade music. He likes the sound of electric guitar, maybe because he heard it many years in our house I also learned a lot from him about arrangment for the orchestra which helped me a lot for the future projects.

Anything on your heart, or something else you would like to share with our readers from Bonavox.nl?

First of all, thanks a lot to you for the interview and interest in Almanac and „Tsar“, and thanks a lot to all metal heads who are buying „Tsar“ and listening to and supporting  Almanac!!! Take care and see you around!!!