Home
Home
Sean Peck was born in 1967 and is a living legend in the hardrock and heavy metal scene. He is known as the Vocalist for the heavy metal bands: Cage and Death Dealer (With Ross The Boss). He also did a lot of Guest Sessions with for instance; Rob Rock, Emerald etc. Death Dealer is touring Europe at the moment so it’s about time to get to know a bit more about this metal ‘freak’ in heart and soul… 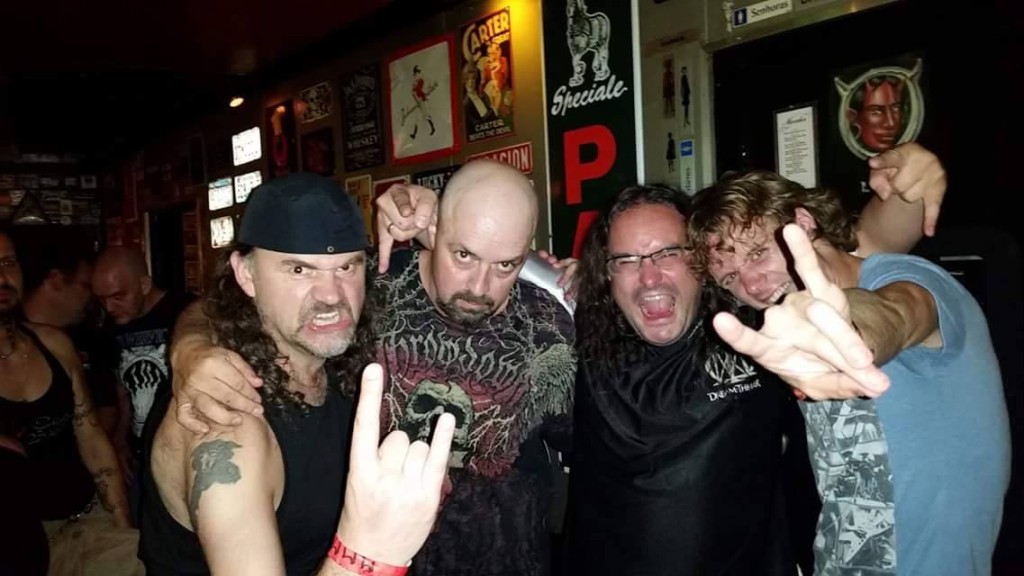 Dear Sean Peck, how are you doing
great getting ready to do the Death Dealer Euro tour.
Can you tell us something about the new album, that is not released yet
Well,it has been ready for quite some time now we wrote most of these songs right after WAR MASTER came out so I have been sitting w them for a while.  I think many people will claim that it is even better than our first album and it covers a lot of ground.  Ross is absolutely in love w the record I can tell you that.
How did you get involved with the band Death Dealer
Stu and I came up w the idea to put a band together as we were doing a lot of writing together and had become close friends.  There is a back story I may reveal one day but basically one night on Skype we decided to do a band with this name and I called up the band one by one and introduced myself and everyone jumped on board.  It was really weird how it happened.
You will come with Death Dealer to Europe in July 2015. Are you guys preparing already to meet the metal heads in Europe
Yes I love doing tours like this.  The fans are so fun to talk to and hang with.  I like meeting old friends and talk metal and it is really what the lifestyle is all about.  Next to performing, hanging w the cool people is the next best thing.
How long you will tour through Europe, anything to mention about it
About 3 weeks 14 shows some small places some larger places.  It is our first headlining gig so it will be interesting to see who shows up.  We are playing 3 shows in Sweden as well and filming  a music video too!

After Europe, Australie/Down Under will wait…Anything else in store……after Australia/New Zealand
I am sad to report that has been postponed until 2016.  It was bad timing it seems there are a ton of other tours happening at the same time so the promoter wisely is rescheduling.
Are you still busy with other projects you are involved in
Well CAGE is in full motion right now and our new album comes out Oct 27 of this year which is a huge record.  And now I am in the DENNER/SHERMANN band and our EP comes out Oct 2nd on Metal Blade records.  We are working on the full length now also.  That is a very exciting group o be involved with those legends.  I am also halfway done with what I call project #1 which is another mind blower so lots coming up and it is all amazing sounding if I do say so myself.
What about Cage, any news about this band
The new album is called ANCIENT EVIL and it is a 78 minute horror concept cd that is heavily HP Lovecraft inspired.  Blaze Bayley does some voice over work in it and it is based on a short book I wrote which is also available as well.
Are you a so called full time musician or do you have other jobs beside playing metal you are involved in
Of course.   My real estate profession supports my metal habit!
Do you have other hobby’s you like, or maybe family to take care about
I play lots of soccer, ping pong, snowboard, I play lots of poker tournaments ( I won one in Bulgaria on the Metal All Stars tour w Death Dealer) I write now a lot and have a second book coming out too.  I chase heavy metal women too.
To be a musician, is that only because of the music, or is there more then only the music that counts, what about the lyrics/songtext. Is this as important as the music? what do you think about this
I think I am pretty well respected for writing killer lyrics.  It is cool to get appreciated for that.  Working with the new Mercyful Fate guys they dug not only my melodies that I came up w but the stories too.  I also tend to write a lot of riffs and hum them to my guitar players so they can play what is in my head.  I probably wrote 35% of the riffs in the new Cage and quite a lot of the Death Dealer in places.  So I am a triple threat man!
Do you have a last word to the readers of Bonavox magazine, The Netherlands
Well we are playing quite a few shows there and Holland is always one of the best places to play for me for some reason.  My first European show was at the Dynamo in 1999 so it will always have a special place in my heart and my great Uncle was Dutch so it is in the blood man!!
Thanks again and to all you readers check out all of these releases they will not let you down I swear on a stack of Necronomicons!!