Norwegian blackmetallers Vreid will release their seventh album Sólverv on October 9 through Indie Recordings. The band has unveiled a videoclip for the eoponimous track “Sólverv” directed by Kim Holm. 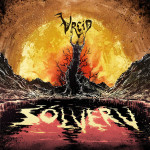 Bassist Hváll has stated the following about this track: “I can say with all honesty that this is a milestone track from Vreid. This song defines all of our work, and feels like our strongest accomplishment to date. Working with the wizard Kim Holm is an enormous inspiration for me. When I saw his work for the first time four years ago I got the shivers. He has gotten the Kittelsen/Valstad touch that I haven’t seen by any artist today, yet a complete unique and modern signature that makes him original. He has brought a new dimension to our art, and the way his artwork for the album has transcended into the video is mesmerising.”

Film director Kim Holm maintains it was a revelation to work with Vreid: “Working with Vreid has been a revelation. As a father, I developed a fascination with the children’s series, In The Night Garden by Andrew Davenport,” he says of the video’s inspiration. “The attention to detail, economy of production, and unique design creates a sense of dream, and I wanted to subvert those tools and create a nightmare. I couldn’t be more pleased with the end result.”