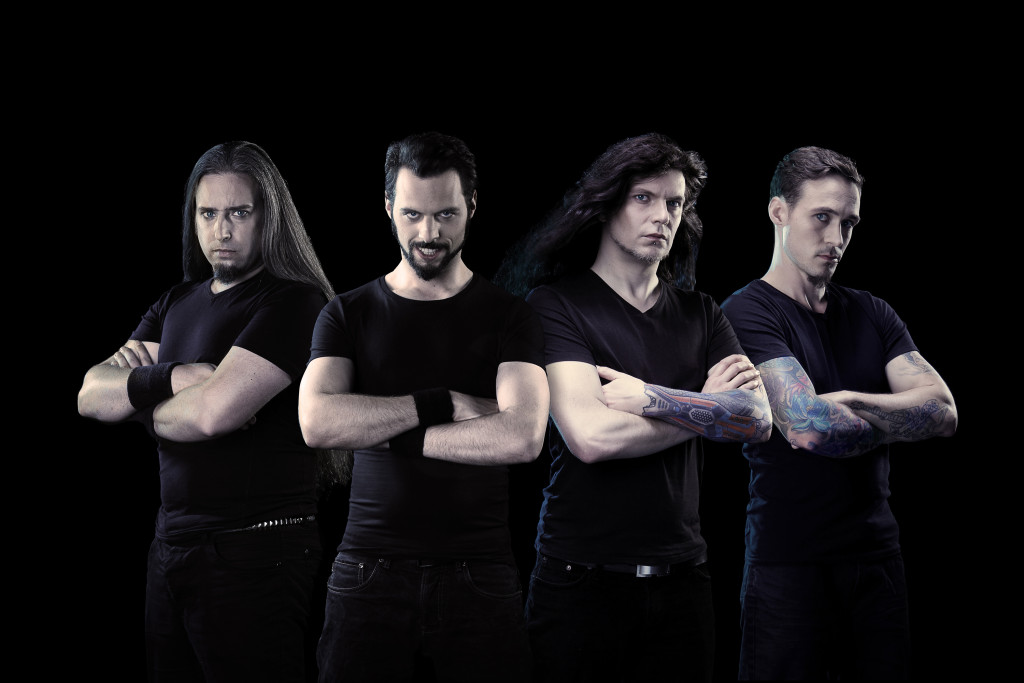 From Germany, Karlsruhe is coming to us a really great, fresh Melodic Death Metal band. When I first listened to Nachtschatten I thought we had a new Rammstein, only the music is a bit different, because we are talking about the death metal this guys are putting into their sound. In 2015 they released their debut album called; “Prolog”. This for most readers is a new band, maybe unknown. But after listening to their strong video clip, called; “Blitzschlag”, what I will publice in this interview you will be maybe surprised. The band wil also play this year live in The Netherlands at the MetalYard Festival, 26 March 2016, Eneschede, Poppodium Atak.

– Hello Andreas, how are you doing at the moment?

Hello Heiko, thanx, I’m quite relaxed and in a pretty good mood

– I catch you right before Christmas and we are heading for the new year 2016…Any thoughts about it…?

The days will be really relaxed and I am looking really forward to our Christmas show 26th December at the club Vaudeville in Lindau, Lake of Constance. A prefect finish for the year 2015.

– The band started in 2010, please tell us briefly how the band got started then….

Daniel and me where playing together in a project since 2008. After all of the members, except us two, gave up cause of private reasons, we decided to go on with another genre.

We found ourselves best in the corner of Melodic Death Metal and this was the foundation of „Nachtschatten“ as we all know it today. 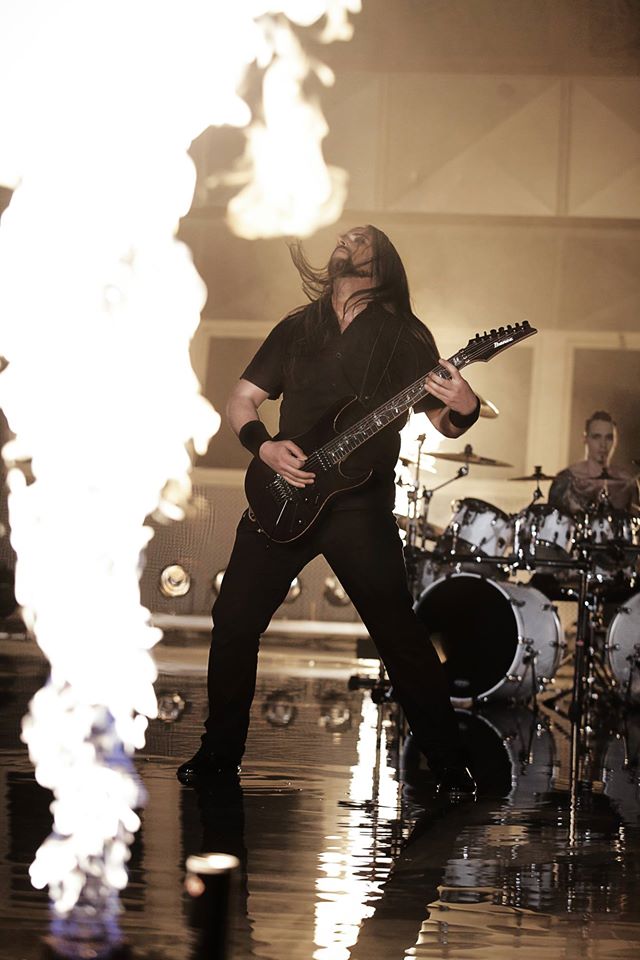 – What is the story about the bandname: Nachtschatten, does it has any meaning?

Sure it has one. „Nachtschatten“ is the German word for Nightshade. The cool thing at the German word is, that the word is combined out of the two words „Nacht“, which means night and „Schatten“, which means shadow. We found that this combination of the night and the absence of light, is a cool philosophical way to combine a few cool ideas into really dark bandname.

We really got good reviews, from 8,5 Points in the German Rock Hard or a 11/15 review in the Legacy print magazine, till 10 points and Album of the year from undergrounded.de.

So, we’re very happy that we scored with our debut album. But of course there are still a lot of people that aren’t fully convinced by that strange German modern death-metal-like stuff we are doing, so we have still some work to do. And also unused potential for our next album(s).

I meet Andreas Bob, the owner of Sonic Revolution a few years ago on the Bang Your Head Festival, as the spirit was good, we decided to work together.

– The production of the album was done in the legendary Little Creek studio in Switzerland, where bands like: Destruction and Pro-Pain used to produce their albums. Please tell us something about your time in that studio?

We recorded most of the instruments on our own, and gave them to the studio for the mixing.

We meet several times with V.O. to discuss everything and work on the tracks. It was pretty cool to feel the spirit of such great bands at the Little Creek Studios. 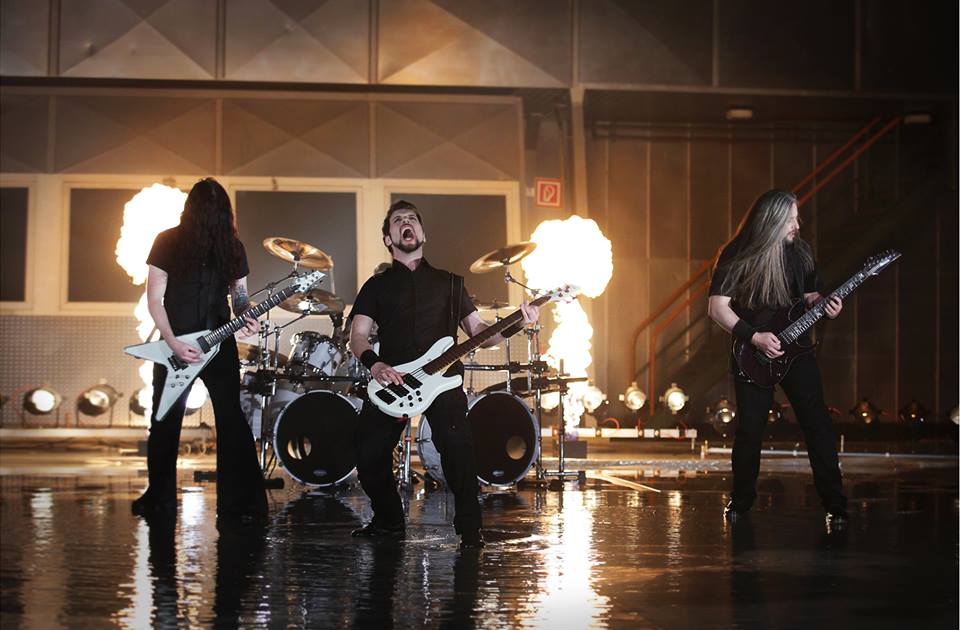 – When I am listening to the video on Youtube, where we can find this great clip called: Blitzschlag. Really a perfect song and video! Then I think when watching this that you guys went to school with the colleagues from Rammstein! and that you play the death metal version of them..What you think about this comparison between Rammstein and Nachtschatten…

Several times, we were compared to Rammstein – I think this comes very easy because of the harsh German lyrics. Ok… the „Blitzschlag“ video is also full of flame throwers, so we kind of brought it to ourselves with that one *hahaha*

In my personal opinion, our music and for sure the lyrics, are more complex than Rammstein, but what can you say, when you are compared with one of the biggest, and most successful German bands ever? Thank you! What an honour.

Maybe we should apply as support act for them 😉 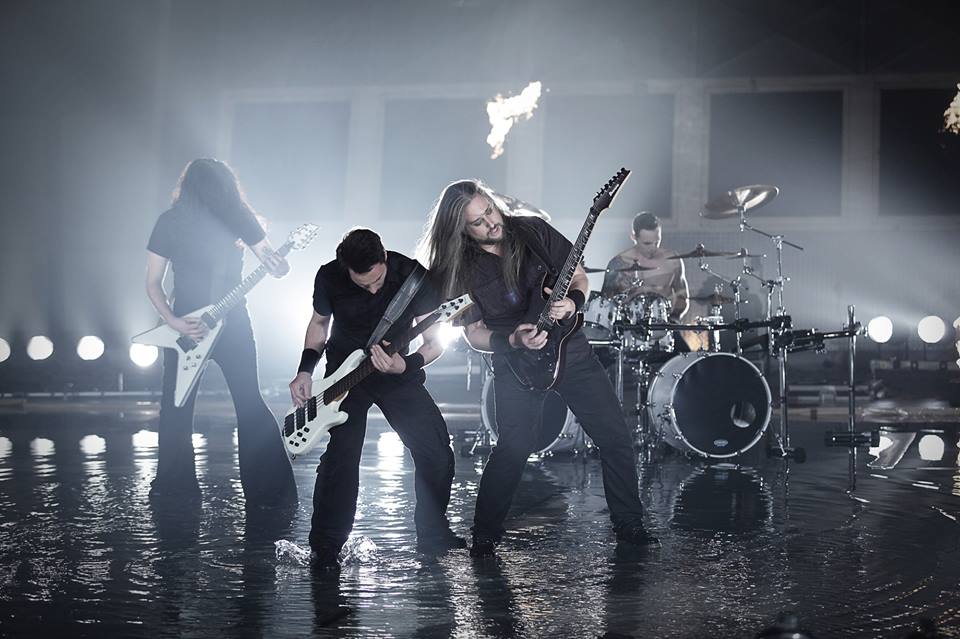 – Where our readers can find all the info about Nachtschatten and how they can order the debut album: Prolog….

All info you can get, you can find on our website http://www.nachtschatten.org you can also order the CD there, as well as all kind of merchandise in our own webshop. This is the best way to support us. Besides, you can get the CDs worldwide, at all of the standard webshops like iTunes, Amazon and so on. The social media side from us you can find at

– What bands you usually are listening to?

My personal taste of music is very complex and for the most listeners, I guess, quite chaotic. Starting  with classical stuff, in the way it meant to be,

over classical rock/metal of the seventies, from Led Zeppelin, over Hendrix to The Doors, to the guitar heroes of the 80s, Van Halen, later on,Joe Satriani and Steve Vai, to Queensryche and the Upcoming Dream Theater. At the same time… strange thing, according to the progressive style of Music, mentioned before, but it is so… grunge!

At the end of the millennium I discovered the new and modern styles of Death and Thrash Metal. Mostly Melodic Death Metal. 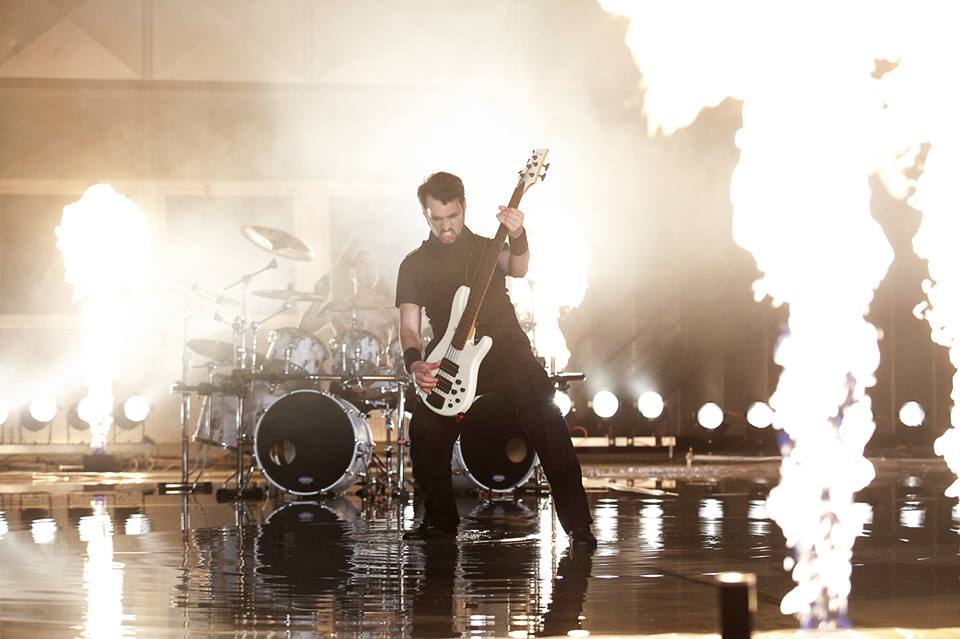 – To come back to this great video-clip: Blitzschlag. It‘s really professionally made, the band is so energetic, like the Music and the strong German lyrics. I could think about you, playing Wacken Open Air etc and being on Warner or Nuclear Blast?

Wow, what an compliment, to hear something like that. We would like to play at Wacken, for sure, and… hey.. right now we’re looking for label who offers a great deal to us for our next Album… so what can we do to conquer the metal world ? 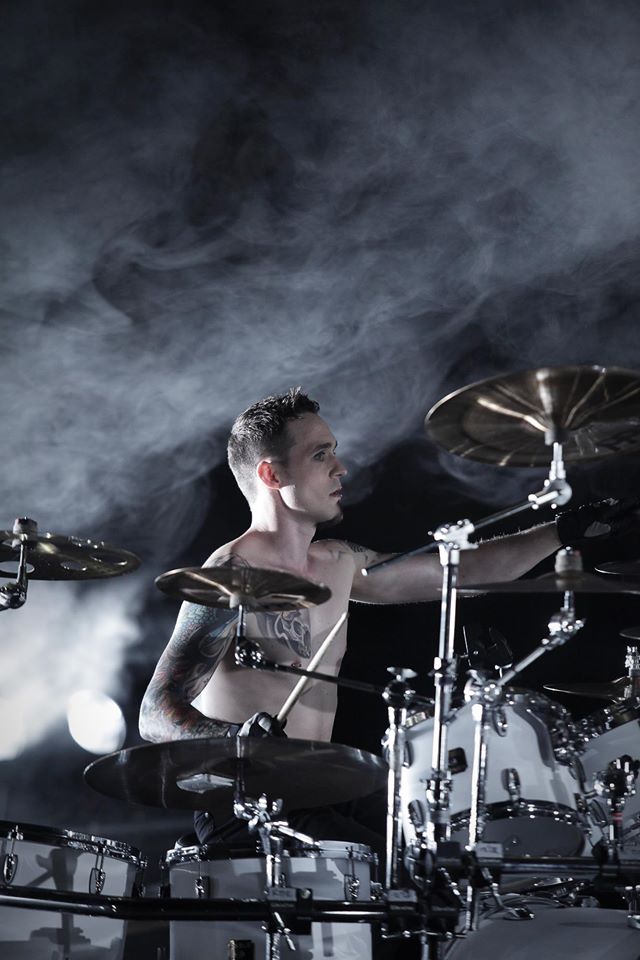 In the beginning we tried all kinds of weird stuff and also we thought about writing our lyrics in English. As you can imagine, it is still not that easy to establish German lyrics at the Metal Scene

but in the end, we came to the point, if you have something to say, and you’ll like to use all the nuances and sometimes philosophical styles of a languages you can’t get along with this type of the English language you learn in German schools. So we use our mother tongue. Another interesting thing is, that the harsh German language is perfectly made for harsh music, don’t you think?

– 26 March 2016 you will play in The Netherlands. At Metalyard Festival In Enschede, Poppodium Atak. How did you got invited to play this festival together with atmospheric black metal band: Sear Bliss and one of the leading Folk/Black metal bands from Holland: Slechtvalk and some other great bands…

This is gonna be really great! We’re very happy to join this new festival with these great bands.

Abhay van den Berg, was asking us if we’d like to play and after he bragged about the hot girls in Enschede, we agreed immediately!! *hahaha*

Because of that opportunity we’re also planning to play some other shows around the Easter weekend so if you can’t see us there, stay tuned on our Facebook page in the next months. 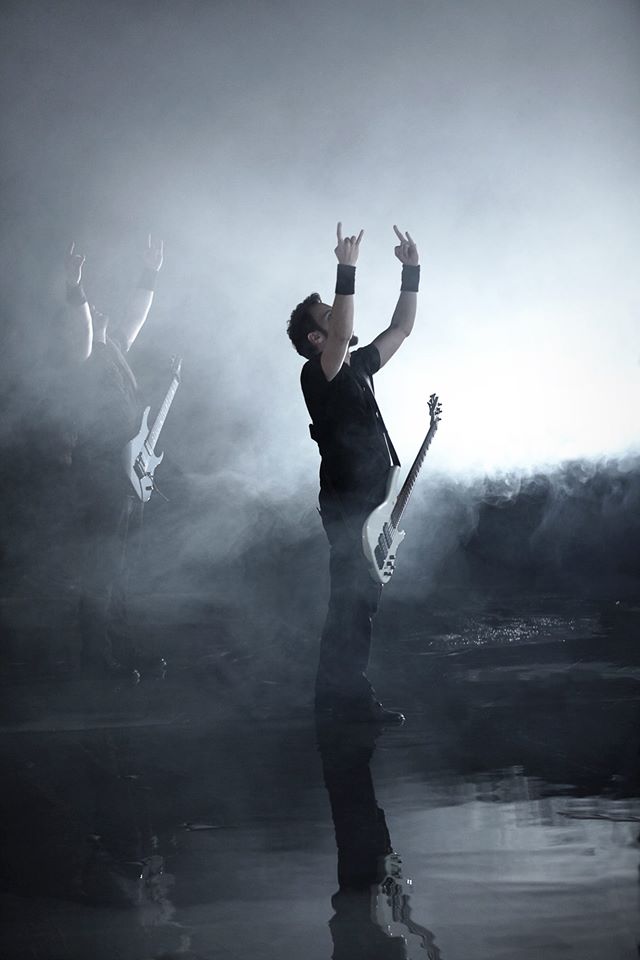 – Any other future plans? Maybe a new album?

Plans? We are drunk and filthy musicians, we never make plans!… *hahaha*

Right now, we’re trying to fill our little gig for the next year. Accompanied by that, we started to write new songs for the upcoming album. On of our biggest tasks right now, is to find a good booking agency for us. Booking and Promotion is something which takes lot of time, which we rather would use to make music or practice hot dance moves for our live shows *hahaha*.

– Any last word or something that is on your heart you want to share with our readers?

Keep the music alive! Especially the live music scene. Go to the concerts, buy a copy of the CD directly from the band if you want to support your most beloved bands! And be always open mind to discover new bands. There are some many good out there.