Dear Al Barrow how are you doing?

Hello Heiko and a Happy New Year to you.

I am doing extremely well thanks for asking. I am sitting here trying not to go back into the cupboards as we still have too much naughty food wanting to be eaten, lol
Post Holidays I find are always hard trying to get back to healthy eating and lifestyles after being in party mode for a few weeks.

Please tell us something about your hometown/city and tell us how the Rock/Hardrock scene is in your area?

Well at present I live in a town called Ooltewah which is just outside of Chattanooga in Tennessee USA. Yes, the song about the train kind of put this place on the amp so to speak. The area is quite beautiful and has a lot of history to it. It’s a small city with a big city feel. Up and coming and quite modern but with some great restored areas that hold on to its history. It`s right on the banks of the Tennessee river that hosts a lot of concerts through out the year. Riverbend  festival is a week of all the countries top artists. Yes, there is a lot of country music in these parts but some great rock bands come to play here. Only a short drive from Nashville the music city, it`s a great place for a musician to live. There are a few local venues that host every type of genre. Blue, jazz, rock and country. the city offers some great night life and one of the main venues called The Tivoli host many great names. As I mentioned we are just a short drive from Nashville so we have The Grand Ol  Opry. Many great played there over it`s fantastic history. The area really does offer it self to out door pursuits. We have some amazing scenery here living in the foothills of the Appalachians near to the Blue Ridge Mountains. 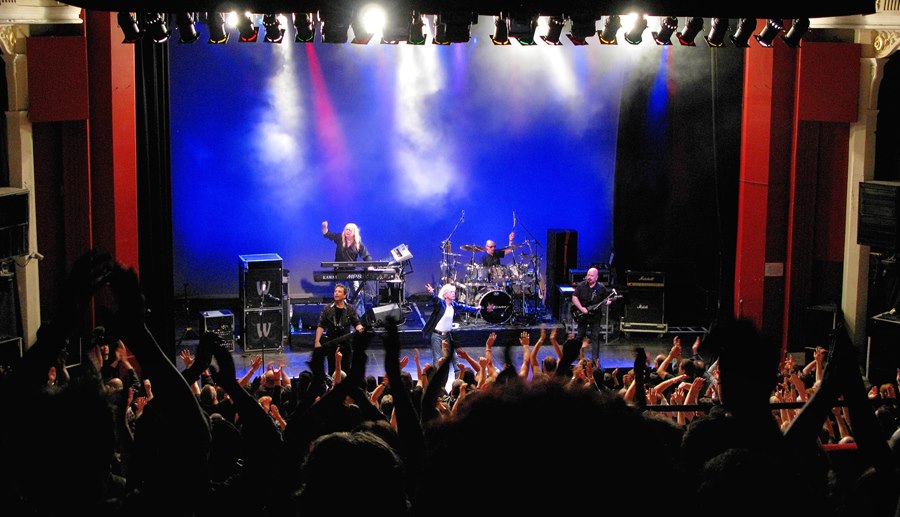 Please tell us about the idea to release the new album called: “The Valley of Tears-The Ballads, what is the story behind it…?

Well it was stemmed form a conversation with Tony and his daughter. They were talking about how many ballads had Magnum produced on within their back catalogue. At the same time SPV wanted to do a book on Magnum but the band and especially Tony was not so enthused by this idea. He feels the music is the important thing and not writing a book. So he said to SPV instead of a book my daughter said how about an album full of Magnum ballads instead. This was well received and plans were hatched. It was supposed to be a quick treatment of the songs but as it turns out Magnum never do things by half and Tony said he wanted to remaster, remix and re record the songs. So we spent more time on this project than anticipated but it turned out fantastic and the product has been well received so far. I do like the album and it has not just been thrown together, a lot of thought was put into which songs and how to treat each one. 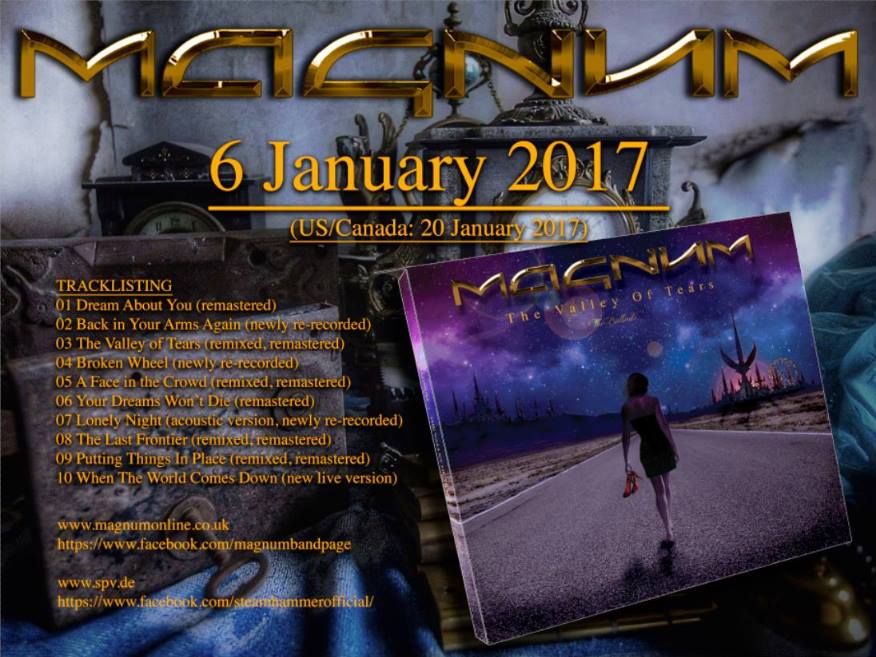 The release contains 10  best of the more quite Magnum songs. I think it could be some more songs, if you think that on a Compact Disc can be about 70 minutes of music. First the band came up with about 16 songs, but finally choose 10 songs. Would it for the fans not be somehow better to give them some more songs?

I think the song chosen have been treated in the best way possible and if a song does not make it all the way to an album there is a good reason. It`s all about quality not quantity ! Also the time taken to do something like this at this standard take a lot of studio time and expense. Something we did not really have a lot of. Tony really wanted to be concentrating on writing new ideas for the next album and also doing a small UK & Irish tour in the winter. i think what is on the album is a fine choice and the very best versions of each song.

I really like the cover, who came up with the idea and who finally designed the cover of the album?

The cover designs for any Magnum album go through so many different changes. The original ideas are very seldom like the final ideas. It was myself that did the final cover and booklet design.

After many different ideas, Tony called me with the idea of a girl walking a lonely road away into the distance. It’s been done many times but thats what he had in mind at this point so i got to work.
Rather than use stock footage we got a model in to be photographed for the front and I put together the landscape around her. Inside the booklet you find photos by Andrew Farrier and good friend and who has been photo Magnum now for a few years. They are images from an old Castle in Scotland. They are treated in a way to make them feel older in some way. We returned to using the Wings of Heaven Magnum logo as it fits better and feels right for this design. It took a long time to get this together but Tony said he really liked the final versions. Right down to the last second things always change and some minor edits were done. It`s always going to be hard when Magnum fans like to see Rodney Matthews artwork and I expect some feedback but so far it`s all been very positive.

Are you playing the ballads/more quite songs regularly at live shows?

We do play “Your Dreams wont die” in the show right now and its great to play. Full of emotion and it sits in the show well. I think it has gone down well with the fans. We like to keep the show quite up tempo these days so we don’t do many balls a such. We did also play When the World Comes down on the last tour, not really a ballad but an epic song nonetheless.

Please tell us something about your own company called: Generic Designs?

Oh, Generic designs has not been around for many years. I just design under my own name. I did have a photographic company with my good friend and guitar player Vinny Burns from Dare/Ten. We spent a few years jumping around Europe covering massive cooperate events. It was a lot of fun, hard work but fun. Vinny kills me he is a crazy talented guy. We both did it as we had spare time in-between recording and touring. We both love photography but you soon learn doing your hobby for a living soon looses it`s flavour. So when my wife and I decided to emigrate we called it a day on the company and went back to our day jobs so to speak.

What are some of your own favourite artists or bands..?

Now I am going to rock the boat here, I don’t tend to listen to rock as such these days. I will still love band such a s Rush, Genesis, Peter Gabriel and Zak Wylde etc, but I do tend to listen to very different things these days.
Zack Brown Band, Hunter Hayes, Blake Shelton, Keith Urban, Tim McGraw, Billy Currington etc. Yes, I know you will probably never heard of them but where I live you can kinda bump into these people in the bars and clubs. It’s where I am right now.

I will be writing myself this year if all being well but I have no pre conceived ideas of which direction I will be going, lol….

Do you have a last word to the readers of bonavox.nl..?
I would like to thank the readers and the fans for the continued support for Magnum. It is going to be a fantastic new year for us and we are very excited to what is to come. New roads to travel, new songs to sing. I hope that can join on my journey along with Magnum and the other fans around the world.
Thank you so much for taking the time to email me these questions and I am sure we will speak again real soon. Have a great day y’all!