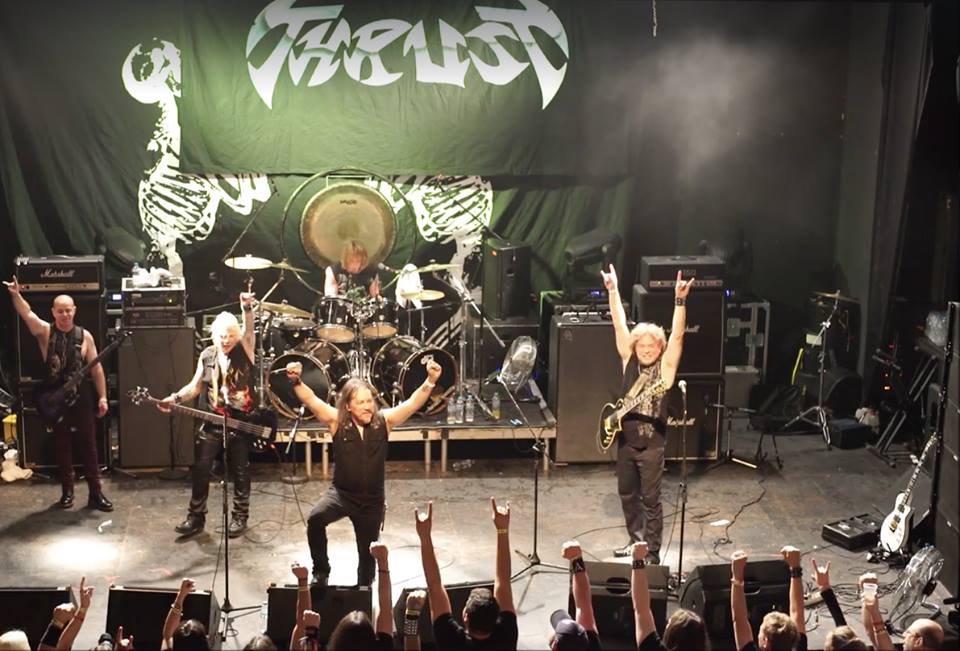 Please tell us something about the city/village where you are living, and how the metal scene is overthere..?

I live mostly in Los Angeles California. The metal scene here is ok some really good major bands come thru town,but not really any “new” metal bands coming up the pike. Its been a revitalization of 80’s metal again which is great.

Tell us everything about the new album: “Harvest of Souls”. Writing process, time in the studio etc..?

Harvest Of Souls Is by farthest our heaviest album we’ve done yet.We started writing new material when we were playing all the festivals last year and finished up writing the album in Jan 2018.We recorded the entire album in about 2 weeks in the studio. 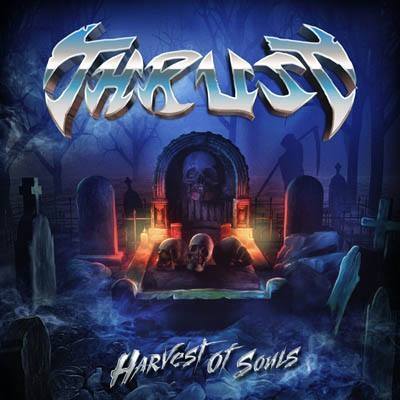 Who created the really beautiful album cover?
Jan at Darkgrove. He took our ideas and really made a great piece of art for the album.

Please tell us about the story/background/meaning of the frontcover and the title of the album: Harvest of Souls…?

Well if you look at the cover and the title of the songs you will see the true concept of it. To me  “Harvest Of Souls” is about taking everybody’s  soul with us on this journey of metal! Its the story of life…….until your soul rises. From the title track “Deciever” to the final chapter in the story “One Step From The Grave.” Its all about the Heaven and Hell in our lives.Lets band together and rise together.All for one one for all! Harvest Of Souls!!!

The band started in 1981 thats really a long time ago. A lot has changed in the world and the ‘metal’ scene. Please tell us about the ‘early’ times and what you saw/changed during all those years concerning the band Thrust and the world where you are living in as a person..?

Well the metal scene is always growing and getting stronger i believe. I think the gravitation these days toward the metal bands of the 1980’s again  is because that sound will never ever be duplicated.We created something special and its lasted this long already.So go out a go to the live shows and buy the albums and keep the metal flag high and the metal fire burning.Its our duty for future generations.

The first EP from the band was called: “Rock for Poland”. What is the story of the title of this album?
We were asked to the Charity event and thats what they called the event.We raised some great money for them and it turned out to be our first release a “LIVE” ep.

Please tell us about the idea and finally release in 2015 of Thrust’s 35 th Anniversary that Metal Blade released as the ultimate edition of your classic album: Fist Held High from 1984, incl. Demo tracks etc..?

Yes they wanted to re-issue Fist Held High and asked me if i had any other material.I had the “REINCARNATION” album that we never released so i added that and Metal Blade found a bunch of demos in their vault and it turned into a “Double Album” and demos.Over 30 plus songs. Everything we had written up to that time. Its really a complete collection of Thrust songs up to the new album.

How this special Metal Blade package was received by press and fans..?

It went crazy and because of it we got back together and the festival tours started again.It was like the 80’s all over again!!!

After the release of the new album, are you guys touring through Europe, USA in 2018?

Yes we will definitely be out and about! We cant wait to play the new album for everybody!!

What are some of your favorite bands?
Judas Priest, UFO, Kiss, Black Sabbath, Led Zeppelin and Aerosmith.
Do you have a last word to the readers of Bonavox?

Yes THANK YOU FOR ALL THE SUPPORT ALL THESE YEARS.  We cant thank you enough the fans for keeping us alive.Hope you love the new album as much as we love you.Stay in touch with us on Facebook and www.thrustonline.com  Up The Horns!!!  Thanks Ronnie Cooke.