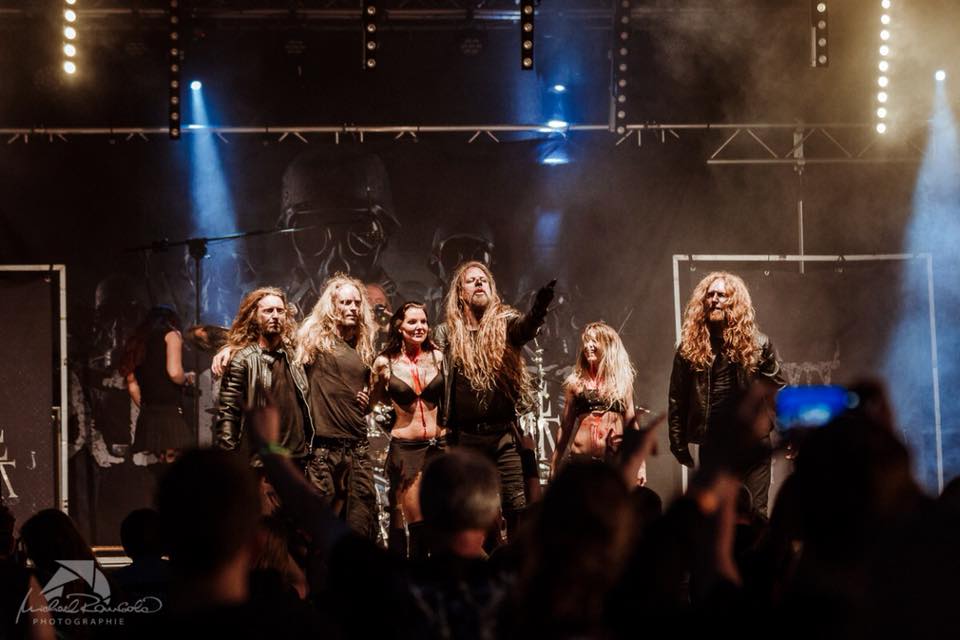 How is it to live in Baden-Wurttenberg, please tell us something about the area you live in? and how is the metal scene overthere?

Tosso: Baden-Württemberg is a really beautiful area in South West germany. We have the Black Forest here and a lot of vineyards, forests and beautiful places.

Alex: Our studio Mastersound is somewhere out in an environment protection area. Here we find focus and concentration in a inspiring surrounding in the middle of the nature, which is in contrast to the often hectic life on tour in big cities and stressy airports.

Please tell us something about the new album, “Okkult 2” and has it something to do with the “Okkult”album which you guys released in 2013?

Alex: OKKULT is an album trilogy. Lyrically it opens up the bright field of the Mysteries of the world and the dark side of humanity. Musically you can hear ATROCITY in its best, most extreme and darkest shape.

Please tell us something about the writing process, time in the studio?

Tosso: The basic songwriting for the new album started roundabout 2-3 years ago. OKKULT I and the MASTERS OF DARKNESS EP helped a lot to focus 100% on what we want to achieve with this new album. We spent a lot of time on all details of the production and everything is handmade,played, sung and growled. I think Alex did again a great job as producer and frontman on our new album!

Alex: For me, the album has the  perfect mixture! Merciless guitars and drums!  Brutal vocal performances, still with a lot of variety at the same time. Choirs, symphonic elements and the horror movie-like sounds are perfectly integrated into the brutal  metal sound. I personally like the fact that besides all the extreme sound and raw power we manage to write really cool songs, create a very dark atmosphere and transport this occult mood in the songs.

Who was responsible for the frontcover of the new album?

Alex: Stefan Heilemann is a good friend of us and already did the artwork for the MASTERS OF DARKNESS EP, “OKKULT” and also several other ATROCITY and LEAVES’ EYES releases and Shirt and artwork designs. He did a great job also for the new album! When I came up with the “OKKULT” trilogy concept, we already spoke about the concept and cover artwork ideas. The Mediabook looks actually like a kind of note book of occult discoveries.

Why you choose LG Petrov (Entombed A.D.) and Marc Grewe (ex-Morgoth) to help you out on the new album?

Alex: LG and Marc are old companions of our band. We know each other from the “golden days” of the Death Metal underground in the late 80ies, early 90ies. In 1989 Atrocity toured with Morgoth, Autopsy and Pestilence. Since that time I know Marc already. In 1990 I brought LG and Entombed to Germany for the first time on the “Support the Underground” festivals with Carcass, Atrocity, Pungent Stench etc. I had organized the festivals myself, and they were some of the first Death Metal festivals on an international level and took place in Germany, France and Belgium. LG and the Entombed guys were very grateful for that. Marc and LG were both on our Atrocity film documentary “The Godless Years” and did great interviews for that amazing DVD. When we asked them whether they would like to be a guest vocalist on “Okkult II”, both were immediately enthusiastically present. The cooperations turned out really cool!

Please tell us something about; Masters of Darkness, All Men Must Die, Menschenschlachthaus and Devil’s Covenant? What is it about, seems like some heavy lyrics again..?

Alex: I was always interested in dark topics and writing these kind of lyrics for Atrocity.

Then in the very extensive work on the “Atlantis” concept (2004), there was an incredible range of different sources, which went from scientific, archaeological work, mythological perspectives on esoteric theories, obscure interpretations of occultists in the Third Reich to the far-out world of ufology. Then it was almost obvious to me that the next concept we would come up with could be about the mysteries of world history and the dark side of humanity. And one album would not be enough, so here we are with the “Okkult” trilogy.

“Masters of Darkness” describes the madness and the occultism in the Third Reich: Inhumane ideologies, an absurd world view and interpretation of world history united as “Black Order” of the “religion of blood“ and sworn the oath on the “blood flag”.

All Men Must Die

At the time of the Thirty Years’ War, there were a number of female prophets who made prophecies. They sometimes had very dark visions, which they communicated to their fellow human beings partly through their own agony and recurring paroxysms. One of those „obsessed women” was Anna Fleischer from Freyberg, who was supposed to be in a trance and floating above the ground, making her prophecies.

“Menschenschlachthaus” describes the real horror of World War I on the basis of a true story. Already in 1912 the German teacher Wilhelm Lamszus had wrote a book of a machine war of annihilation in detail. A dark prophecy that was to become a cruel reality. Two years later, he himself had to be a soldier in the First World War and witnessed his dark visions. Initiated by the mighty of the world and their agitation, hundreds of thousands were carried away in the mud of the trenches by the modern war machine.

Gilles de Rais is considered one of the most ruthless and brutal mass murderers of all time. Once he was a godly nobleman, great general and brother in arms of the Maid of Orleans, Jeanne D’Arc. After her execution, he squandered his fortune and drifted off into a sadistic, bizarre world of horror. He tried to regain wealth through satanic rituals, ghost summonses and alchemy. At the same time he carried with him a delegation of churchmen in his retinue. He and his companions murdered and tortured countless children, whom he had kidnapped by his servants from the villages of his people. In a bestial way and in the blood rage, he became a unrepentant monster and organized “beauty competitions” with painted, severed children’s heads. Prior to his sentencing to death, he made a perfidious speech in which he urged parents to take better care of their children. 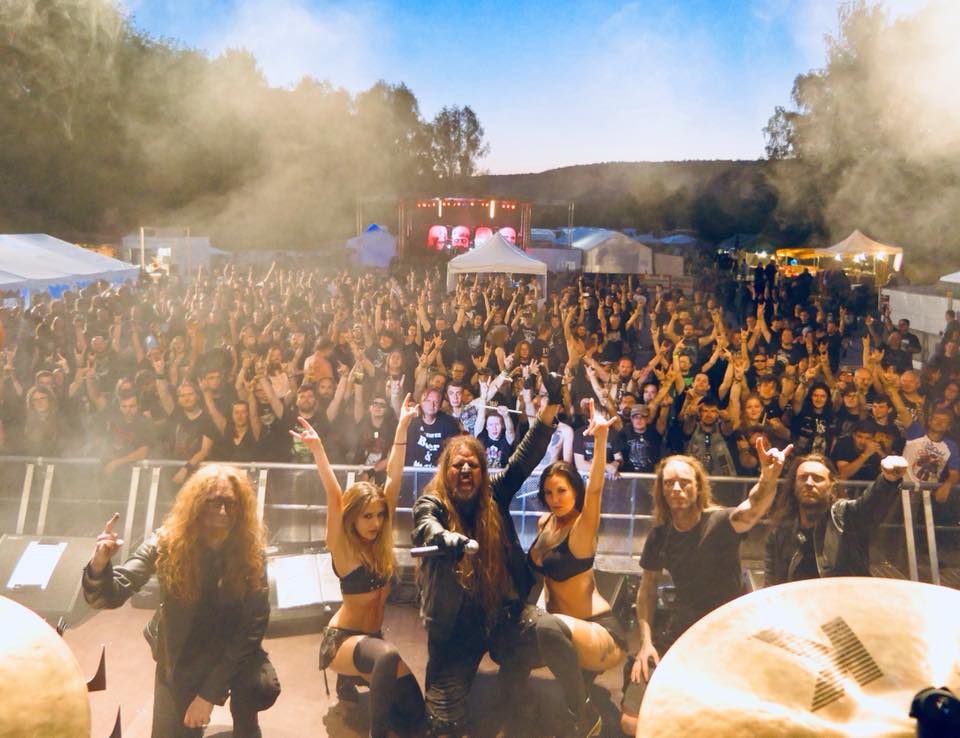 The band just played the Sunstorm Festival, It’s the start of the Okkult 2 Tour? Did you guys get a good response from the audiance playing the new material?

Tosso: Yes, it was a fantastic summer evening show here in south germany. A lot of our friends were also with us to celebrate the release of OKKULT II. The new material is very powerful and exciting to play live and also to experience in the audience.. We had fantastic reactions from the fans and sold a lot of our brandnew merchandise too. My personal live favourites to play were „Spell of Blood“ and „Menschenschlachthaus“.

Are you planning a worldtour after the release of the album?

Tosso: Most of the touring for OKKULT II will happen from 2019 on. We have several international offers and are excited to play a lot of live shows. Already for OKKULT I we played in Latin America, North America, Europe, Asia and before we started workin on OKKULT II, also in Belarus for the first time.

So you can expect a lot of touring also for OKKULT II.

Alex: I grew up with Deep Purple and Pink Floyd. When Heavy Metal conquered the music world I was there and totally into it haha! As a young metal kid going for Iron Maiden, Priest, Motörhead, Accept or Saxon. I always wanted to go for the extreme. When I was a teenager which was also the time when we formed Atrocity, I liked Venom, Slayer, Celtic Frost, Possessed or Bathory. Metal is my lifestyle as singer and music producer! I do like all kinds of metal bands like Lamb of God, Hatebreed or Sabaton which we toured with in USA and Canda with our 2nd band Leaves’ Eyes. But I do also like acts outside of the metal world, too, like Laibach or film soundtracks.

Tosso: I love bands like VOIVOD, which i have just seen during our 70.000 tons of metal trip, legendary :). Besides that I also love Gojira and a lot of classic bands like Rainbow and  Iron Maiden.

Alex: Thank you very much for this interview and thanks a lot to all our fans in Netherlands! Check out OKKULT II and see you on tour!