I recent got the chance to interview an new hardcore band from the US Eyes of Eli, a new power house! We talked about the recording process, lyrics on the new album, and what the future holds for the band.

As your band Eyes of Eli is not that known in The Netherlands, could you please introduce it and its music to the readers a bit?

We are a Christian metalcore band out of Lynchburg, Va U.S. We have been together as a band since 2010. We have released one full length album in 2012 and have just finished up our brand new EP Ignite and released in February 2014. We have had the opportunity to play many shows over the past few years with bands such as: Norma Jean, This or the Apocalypse, The Human Abstract, Texas in July, Onward to Olympas, Vanna, Blood of the Martyrs and many more! We have a lot of different influences and our sound is very versatile and diverse. Some influences that we have include but not limited to: August Burns Red, Bless the Fall, As I Lay Dying, P.O.D., Pillar, Blindside, For Today, A Day to Remember, Norma Jean, Destroy the Runner, Demon Hunter, Project 86, Korn, Rage Against the Machine, Nonpoint, Sevendust, and many more. As a band we make it top priority to ensure that we are doing this for the right reason and that is to glorify our Lord and Savior Jesus Christ. He is the reason we have our talents and has blessed us with so many opportunities and we feel that it is a must to give back to Him and to show others what it means to live for Him. 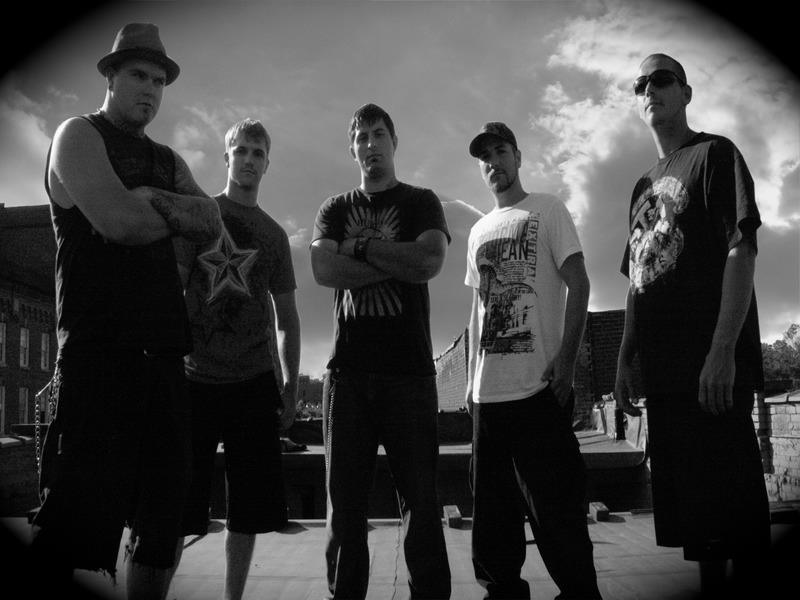 How is the new material sounding, in comparison to your debut EP?

We have definitely grown as musicians and as a band from our 1st full length album to our new EP ‘Ignite’. We feel that the new songs on the EP are much heavier and much more melodic and catchy at the same time. It is just the next step as a band and we feel that our writing process has improved and we all work much better together as we have played together for longer now. Also the recording quality on this album has also taken a step up and the overall sound is awesome on the new EP.

Could you please also tell us something about the lyrics of the new album? Are they anyhow connected, is there some kind of concept behind them? Do they differ in any way from the lyrics on the previous EP’s?

The lyrics on the new EP are a step up from our debut album. On our previous record, a lot of the lyrics were directly from scripture. We believe the Bible. We take it as God’s word. We believe in Jesus Christ. An we try to make our lyrics reflect that. With our lyrics on the first album, it was more theology based. For example, in our song “Fallout”, it talks about the second coming of Christ; which is a factual, future event that will actually take place. The lyrics talked about the millennial reign of Christ and the tribulation. But a cool thing about that song is that it’s also based on the game “Fallout 3”. (For instance when it says “with a heart made of steel”. That’s a reference to the Brotherhood of Steel in the game. But mostly it’s based on the book of Revelation. There was some personal testimony; such as “Seed of Lust”. In that song, I (JB) wrote that as a personal testimony about my struggle with pornography. I was completely addicted and living in sin and hypocrisy. But Jesus, in his grace, delivered me from it. It was a battle, it took time, but eventually there was victory. And that’s why I wanted to be open in that song; to show people that there is hope. It’s not over. There is hope in Jesus Christ. So it was a mix of theology and personal testimony on the last album. On the new EP, the lyrics are more challenging. Its more of a call to arms to Christians. The new EP is a challenge for people to stop just saying “I’m a Christian” and start actually backing it up with your worship and your life. That’s what the song “Return to Sender” is all about. It says “It’s time to gather the masses, it’s time to unsheathe your swords. It’s time to pick up your manhood, that you left back on the floor. The world looks at us and mocks the truth because of cowards in the pews. We’ve got enough swine to go around, we don’t need more like you.” Then it switches to “Religion is death, return to sender.” Christianity is not a religion. Religion is boring and man made. And God hates religion. (If you don’t believe that, then read Malachi). The bible uses strong language about religious garbage and Jesus did too. In Ezekiel, God says things like “You make me sick.” and “How sick is your heart?”. Religion is the reason for things like the 30 years Wars and the Crusades. Religion is the result of man trying to be God, instead of man trusting and submitting to God. That’s the main message of the new album. And quite honestly, our song “My God is a Lion” was written as a direct response to the radical atheism moment that is currently “trendy” and lead by men like Christopher Hitchens and Richard Dawkins. We respect everyone’s beliefs, and we would never force Christianity on anybody or beat anybody over the head with our message, but to be frank, we would take death before denial when it comes to Christ. Jesus has done so much for each of us and we want to offer that message of hope and forgiveness to everyone we meet. But we still love you if you don’t believe as we do.

What about the choice of band name, Eyes of Eli?

Loosely based from the movie “Book of Eli” with the bible story from 1 Samuel 3, when Samuel hear’s the Lord calling him and runs to Eli. Eli helps Samuel see that it was the Lord speaking to him and that he would hear if he just listened. We want to do the same for others. To help them hear the Lord speak to them. It basically says we “walk by faith, not by sight.”

When did The Basement Recording come into the picture? Were you actively seeking label support at the time?

We recorded and produced both of our cds to date at Full Circle Recording in Chester, Va with Dan Uphoff. He has a deal worked out with Jamie King and The Basement Recording to send his material that he produces for bands so that Jamie can put the final touches and mastering on the album. We currently are not signed to a label.

But back to the music. Discuss how the band’s sound may have changed and/or progressed from the debut EP through Ignite.

The new EP songs we feel show our growth as a band and our songwriting improvement. We feel that people will really catch on to these songs and they will stick with you both musically and lyrically. They are heavier but at the same time more melodic.

Tell me about the album title, Ignite.

The title of the new EP ‘Ignite’ ties in with all of the songs and also the artwork for the new album. Our song Rekindle is about being a light to the world for Christ and setting an example for others by being different and shining bright for others to see. Lyrics from chorus of that song are: ”Light a fire under me. Shine it bright for all. Show me how to let go.” We are asking the Lord to help us let go of sin that is holding us back and to shine bright for all to see. The artwork was done by our guitarist Coy Irby and it ties in with the title Ignite. 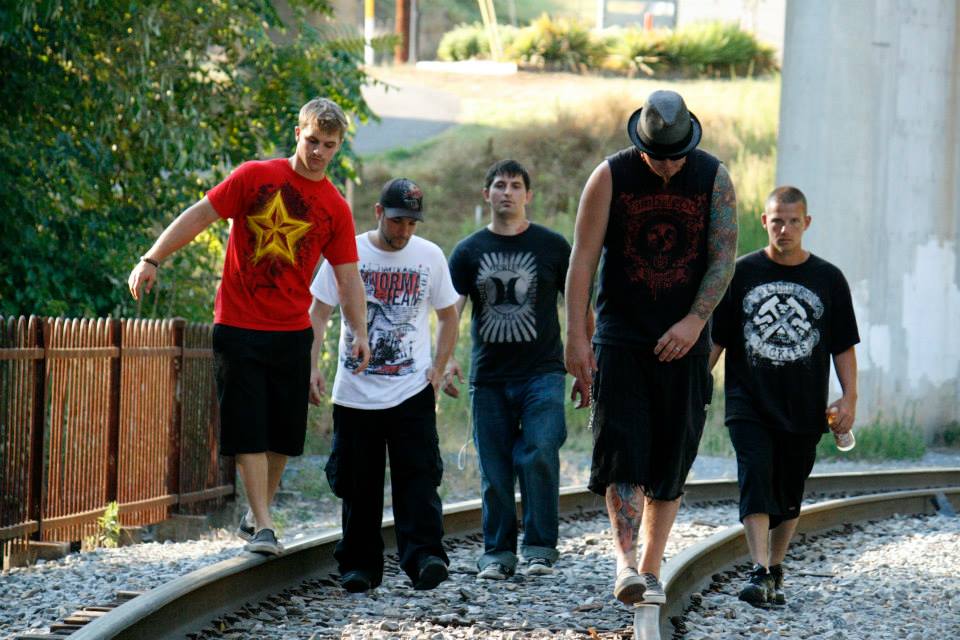 We don’t currently have any touring plans as of now, but if God blesses us with the opportunity it is something we would love to do.

Are you a “christian band” our a band with christians in it?

We are a Christian band and are all about spreading the love of Christ.

August Burns Red, Demon Hunter, As I Lay Dying, Norma Jean, Destroy the Runner, Impending Doom, P.O.D. Pillar, Blindside, Project 86, For Today, Memphis May Fire, Rage Against the Machine, Korn, A Day to Remember, Deftones, This or the Apocalypse, Nonpoint, Sevendust, Metallica, and many more!

We do consider this a full time project for us and would love for it to lead to more recognition and success. Currently we do all still work full time to financially support our families as we do not bring in enough income with the band to not do so. Guitarist Dane Harrison is also in a side project Christian thrash/metalcore band BoughtxBlood. Our families are awesome and have been so supportive of this band from the start.

We love all of you guys and thank you so much for showing your support for this band. We could not do this without our fans! Anyone who has any questions or would like to talk to us about how you can know more about Jesus and why we live for Him feel free to hit us up at www.facebook.com/eyesofeli. Or if you just want to talk to us about our music or anything else we would love to hear from you. Thanks so much!