Home
Interviews
Master is a death metal band formed in Chicago, USA in 1983 as the band Warcry fell apart. However, the band was put on hold due to internal problems shortly after its inception. Paul Speckmann then formed the band Death Strike, which in 1985 he renamed to Master. And their it all started, for this now Legendary death metal artist who is “MASTER”. We wanted to do this interview at Stonehenge Festival, Steenwijk-The Netherlands last weekend but due stormy weather the festival was cancelled after some hours. So finally we did this via the e-mail. Dear Paul, How are you doing at the moment? All is fine my friend, just rehearsing for the new album which will soon be recorded again at Shaark Studios in Bzenec, Czech Republic.
We have written 12 new tracks of brutality for everyone’s listening pleasure!
Are you with master on tour at the moment, or you just came for one show to Stonehenge Festival, Holland? Actually we came for a weekend jaunt beginning with the Ragnarock Festival in Germany followed by Stonehenge!
Bad/stormy weather at Saturday’s Stonehenge Festival was the reason that they stopped the Festival, so all metalheads had to leave and that’s why you did not play with Master at this festival? How did or do you feel about it now? As I said in my post on Facebook, it was better to save the lives of the fans as well as the performers in my opinion. The festival will continue next year of course, mother nature cannot be controlled!
I saw on Facebook that you are drying the shirts that the band was selling at Stonehenge, probably everything is wet, because of the Storm in Holland? Yes I continued to sell shirts and CD’s during the storm for at least an hour before finally packing up!
Hopefully you sold at least some shirts and cd’s etc at the festival?…Yes, I sold a bit but with all the people leaving it was a difficult task, but life goes on, another day another Euro’
What about if Master would play next year’s Stonehenge Festival? If we are invited we will again return of course. We played this stellar fest about ten year ago and we had a blast, so hope we are asked to return next year!
Can you tell us something about your book, which is called: Speckmann, Underground Survivor, The Pictorial? It’s a book that shares photos from my youth as well as throughout my career. 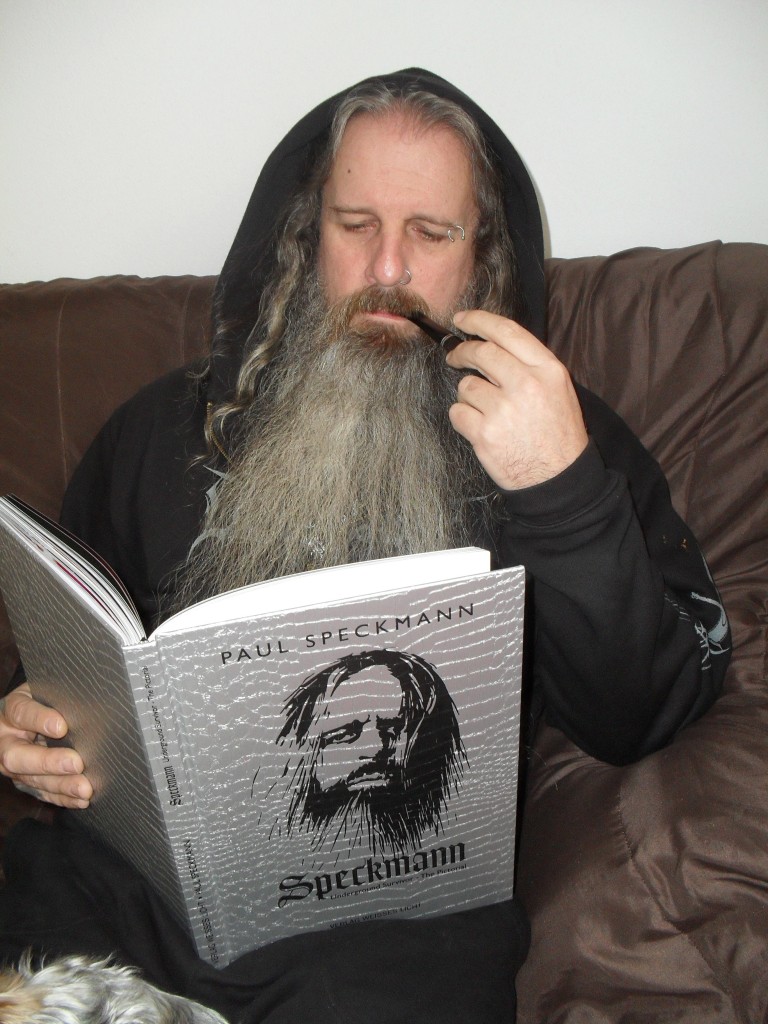 Master is from originally a band from the USA, why did you leave the states to be in Czech Republic? I joined a band called Krabathor for some years and just stayed and built a new life in Europe!
What about a new album? your last release which is called: The Witchunt, came out in 2013? We will be recording soon as I said in the first question!
What was the album The Witchunt about? Every Master album deals with themes based on society and the perils man faces at a particular time!
Are you involved in other bands or projects? I play also in an old school death metal band called; Cadaveric Poisen. We will record a new album, that will see the light of day, end of the year.  https://www.facebook.com/C.P.DeathMetal
Can you tell us something about the record label: FDA Rekotz, are you with Master still on this label? FDA will be releasing the next Master CD. Rico and family have done a fantastic job on the last release so we will continue certainly!
What do you think about the Dutch metal fans? Dutch Metal fans are some of the greatest Metal fans in the world!
What are your own favorite bands, to name a few? Rainbow, Black Sabbath, Deep Purple etc!
Any last word to the readers of Bonavox? Sure buy some merch at: http://www.master-speckmetal.net/shop/
And…Support the underground!