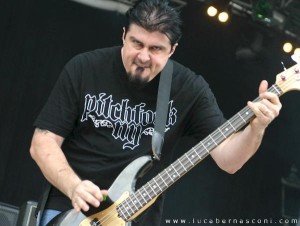 Frank Watkins passed away this morning at the age of 47. Circumstances surrounding his death have yet to be disclosed. Watkins was an American heavy metal musician best known as a former, long-time bass player for the death metal band Obituary. Since late 2007 he has been the bass player of the Norwegian black metal band Gorgoroth.

Frank Watkins began playing music at the age of 12, and began his professional career in 1986, before joining with Obituary in 1989. He has played on every Obituary release, except for their debut album Slowly We Rot and cites his musical influences as “anything dark, aggressive, and pissed off” and tends to bring his punk/hardcore background to the realm of death/black metal. Frank prides himself not only on the technical side of his music, but also in the business aspect, managing, mentoring, and guiding other bands and musicians. He formed his management company Back From the Dead Productions in 2007 in hopes to help bands create a positive career in the music business. In late 2007 Watkins became the bassist of Norwegian black metal band Gorgoroth, and in 2009 he participated in the recording of the Gorgoroth album Quantos Possunt ad Satanitatem Trahunt. He debuted live with the band at the Hole in the Sky festival in Bergen on August 29, 2009. This was the first concert Gorgoroth had performed since September 2007. In an interview with Metal Maniacs published online in August 2009, Watkins explained that for his work with Gorgoroth he had taken the stage name “Bøddel”, which means “Executioner” in Norwegian.

Obituary had this to say: “Just got the very sad news that Frank passed away this morning. Our thoughts and and prayers are with his family.”