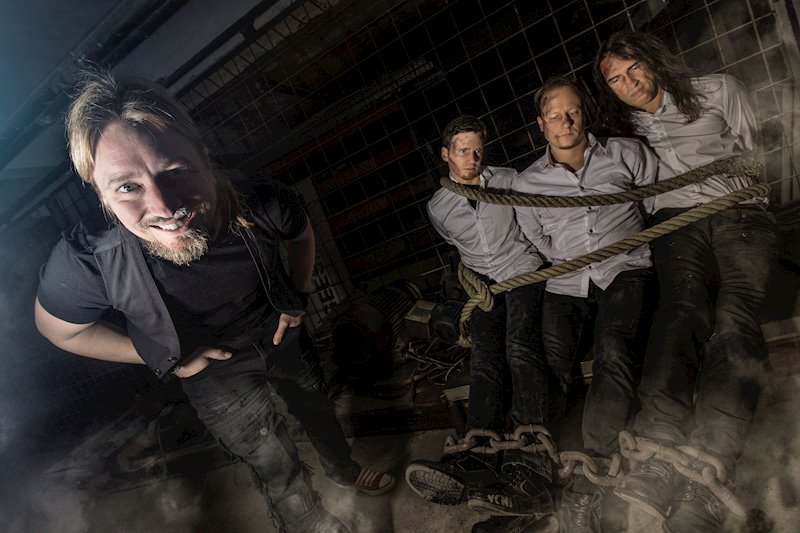 Originally founded in the 1980’s as classic Power Metal band, SQUEALER from the north of Hessia, Germany so far have had a busy band history. Today, the music by SQUEALER is a melting pot of several Metal elements which has enhanced through the years, i.e. an unique and diversified mix of Melodic Thrash Metal (which nowadays builds the foundation of each new SQUEALER song), groovy Rock stuff and, of course, the still obvious Heavy, Speed & Power Metal influences.
After the release of eight studio albums and lot of career highlights such as performances at the big Summer festivals, support shows with Motörhead, Rage, Blind Guardian and many more, five-figured albums sales for the album Under The Cross followed by a tour with their big heroes  Judas Priest the group faced a lot of deep hits as well. One of the biggest defeats was the accidental death of singer and founding member Andreas „Henner“ Allendörfer in the year of 2005. After the angry and very aggressive album Confrontation Street(2006) which featured Gus Chambers (Grip Inc.) on vocals, SQUEALER just found back to their common theme in the year to 2008 with the release of the CD The Circle Shuts.Numerous changes in the line-up made it almost impossible to continue to work in a professional manner. So,  SQUEALER was put on hold for a while to take their time to search for a suitable line-up and only to continue occasionally with playing music in a smaller set-up.
Now, in late 2017, the band is back full force and with a powerful line-up which just was completed last year. SQUEALER now consist of Lars Döring (guitars), Michael Schiel (guitars), Sebastian Werner (vocals) and Manuel Roth (bass). The band has started to perform live again in 2016 and since then played several gigs and festivals (incl. 70000 Tons Of Metal) with the new and convincing band constitution. The live shows were directly followed by the recordings for the new album Behind Closed Doors. The new record impressively proves the strength of the new SQUEALER line-up. To complete the makeover, a new, highly professional team was added for the album production.   Ito Grabosch took care of the recordings while Roland Grapow (Helloween/ Masterplan)  handled the mixing and Mika Jussila (Nightwish, Lordi, Him, Children Of Bodom) the mastering. The artwork was designed by  Thomas Ewerhard (Amon Amarth, Avantasia).
In late 2017, SQUEALER also has revealed the name of their new record label. Out of several offers, the band decided to go with Pride & Joy Music who will now release  Behind Closed Doors on February 23rd, 2018. In advance, three singles will be published from late November. SQUEALER also has found a new partner to work with at the booking sector; Nauntown Music are currently working on more dates and festivals for 2018 & 2019.
Line-up: Lars Döring (guitars), Michael Schiel (guitars), Sebastian Werner (vocals), Manuel Roth (bass)

Hello Lars Doring, how are you doing?

Hello, I’m fine and I’m in a really good mood.

Please tell us something about the area you are living in, Hessen, Germany?

I live in the middle of Hesse and this is a really countryside area with a lot of nature, very quiet. For some people maybe it is boring but I like to be here and all band members live very close to my hometown! The advantage is that we live here quite centrally and can also reach everything very well.

You are the oldest bandmember in the band. I mean the member who is in the band since 1989. Please tell us about these early Squealer days…?

Yes, I’ve always been the oldest in the band in recent years, that’s about to change, but of course I’m by far the longest Band member. It used to be a bit different with Squealer because partying was an integral part of the gathering, so we don´t have so many other commitments in the past and we´ve got a lot more time in the early days. We rehearsed much more often and regularly together. It works differently now, we rehearse more often in small groups or at home alone, and only occasionally meet together to discuss things, rehearse, and tweak things. It works very well and since we get along very well we are a good unit, but we do not hang out together every week. Now for us the most important thing is that we write songs that sustainably present the best result we can achieve in our view and it is also important to us that we can reproduce that in a good recording, so that our fans at home can get the same  experience in this intensity. Of course the fun is not too short!

Since 2015 the band reformed. Please yell us about it and how did you find the new/other bandmembers..?

Michael Kasper decided to leave the band and I asked Manuel Roth if he would like to join us. I have known him for a long time as a musician and from the environment of my private circle of friends. He was very happy about this request and also promised directly. Michael Schiel occasionally goes with a Whitesnake cover band. That’s why he knew Sebastian Werner. He had not brought him into contact with Squealer. One day he overheard Sebastian singing a song by Children Of Bodom, and then he suddenly thought, hey, this guy would be a good match for us. Later we invited him as a guest vocalist to perform a few songs live with us. A few month later Norber Vornam has left the band, we wanted to bring him to the band and he agreed to it. So he came to Squealer.

You guys where playing the 70000 Tons of Metal in 2016. Please tell us how they contacted you to play this awesome experience and tell us about the live on this heavy metal Cruise.. thing…?

Our booking agency has made the contact and we got a spontaneous commitment. That was actually settled relatively quickly and we could go on that cruise. During the cruise one quickly loses the time reference. Quite around the clock you can watch great bands and of course you have a lot to do by yourself, because each band plays two shows, we´ve got an autograph session and of course other organizational things to do. The time really goes by very fast. All in all, I can say that this is really a great experience and every Heavy Metal fan should think about going to this event, because it’s so unique to travel around the Caribbean with so many great people and great music. 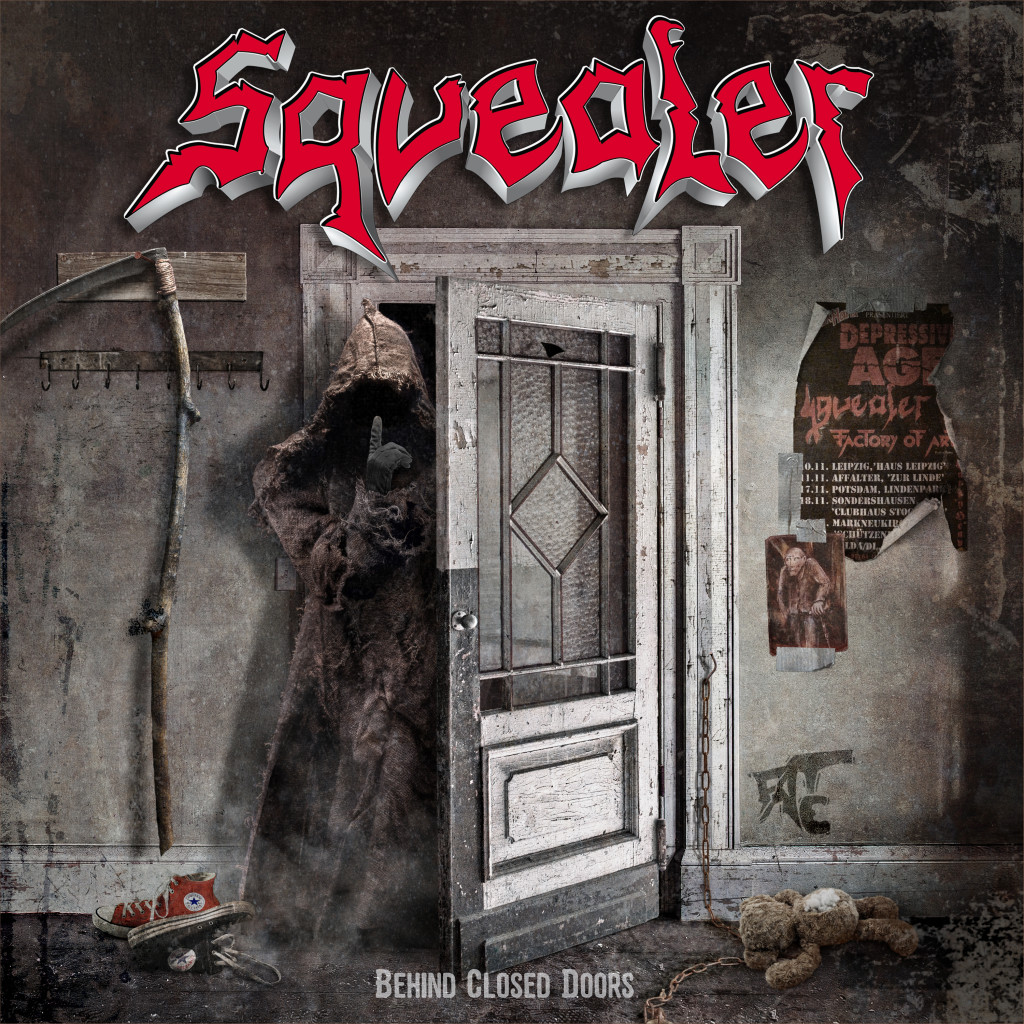 In 2018 the new album will see the light of day. With the title: “Behind Closed Door”. Please tell us something about the lyrics of the new album, what is the meaning behind the album cover and tell us about the time in the studio etc.?

The lyrics of the album deal with political and social issues as well as personal circumstances and experiences. The lyrics deal with different fears and things that may well stay hidden. These can be any threats. For example, fear of failure, fear of war, fear of crime or, just like children, of ghosts. We wanted to do this graphically on the cover and I think that Thomas Ewerhard did it very well. We were fortunate enough to find a studio that we could easily reach, so we could take it over and over again for a long period of time, taking breaks to reflect and evaluate the recording. So we worked our way forward step by step and had a lot of fun listening to how the music gradually becomes a whole piece of great music. This creative process is an absolute highlight for me. Everything was fully recorded, there was no copy and paste, everything was created real, sometimes we came to well over a hundred tracks.

The band released a special single in advance of the release of the new album? Please tell us about the single and how our readers can find all the info about the band and the new album?

Before the album three singles will be released in a monthly cycle. The second single already had more than 25000 streams on Spotify after two weeks. At the end of January the third single will be released and on the 23rd of February 2018 the album will be released. We started with the title track, next came M:O:T:M (Master of the Moonlight), the last song on the album. Both songs represent the full range of the album. Further information about the band is available on the Internet at www.squealer.de and at facebook.com/squealerofficial.

On this album you guys work with mister Roland Grapow, known from Masterplan. Please tell us about this cooperation?

We have known Roland for many years and he has played a guest solo for us before. We knew he had produced the last Masterplan albums himself and we thought he could create an ideal sound for us as well. Now I can say that this really worked very well. During the mix we had constant contact and it was quite easy to get the wishes of the band through him. We think he has done an excellent job.

For the release of the album we will play two shows in Hesse and in the summer we have scheduled gigs at different festivals in Germany. Everything else is still in planning.

Do you have any last word to the readers of  Bonavox.nl

Many thanks to all our fans for keeping us loyal for so long. All those who do not know us yet should check it out and visit us at a concert. No matter, stay true to Heavy Metal.