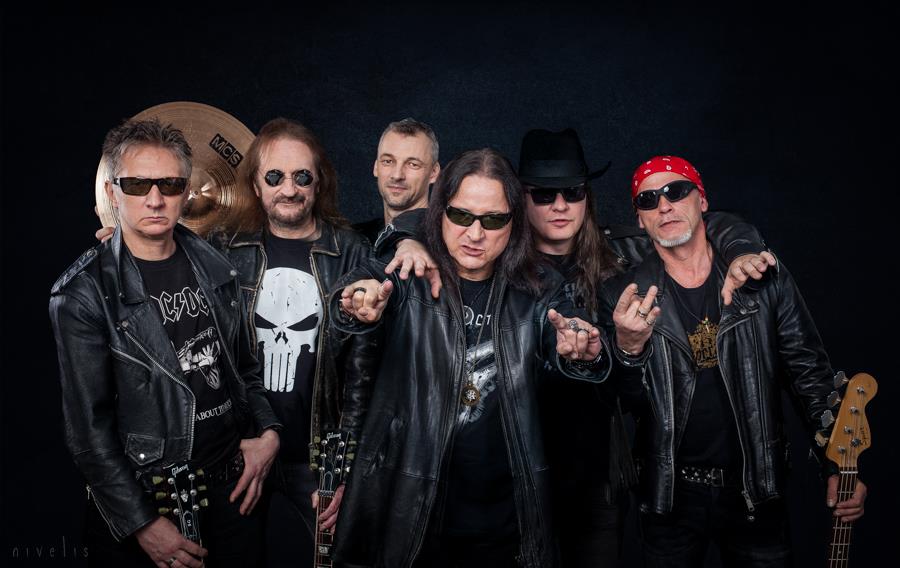 Dear Janusz Stasiak, how are you doing?
Thank you, I’m great.
I heard that you where just on a vacation, diving? Is it a hobby of yours or so..?
Well, I’ve just come back from diving holidays in Marsa Alam, Egypt. I’ve been diving there for 20 years! I love such vibes! They fuel me with energy and strength for craziness on stage!
Please tell us something about your hometown?
I’ve been living in Warsaw since I was born. The capital of Poland is a big city and a place becoming more and more beautiful within time. To me, that’s the most important place on the Earth.
Is there any hardrock or heavy metal scene in your area?
Well, maybe not literally „next to me”, but there are such rock scenes – even quite a few – like Progresja Club, Fugazi or VooDoo.
Please tell us about the new Korpus album: ” Respekt”. About the writing process, time in the studio and how the album was received by the press?
The content for the album has been created for the last two years. We’ve recorded 10 songs out of which more than a half are new compositions. From the old pieces, from the 80’s, there are just four that have found their place on the CD. They are: AS, BAL ŻEBRAKÓW, NAFTA and IMPERATOR. However, they are also in new musical arrangements, because previously we haven’t had any keyboards and backup.
The new Korpus is really about more complex arrangements – and this is the direction we are trying to follow. Each of these compositions is as if a new story that tells us about some aspects of a contemporary life… such as love, betrayal, poverty, ordinariness. There is also a place for a bit of “a demon spirit”. On our album there are as many as three ballads because this is a trademark of Korpus from the old times – melodic riffs, tearful ballads and lyrics that are simple but not simplistic! A life in a nutshell, so to say. The press has received the album – to our astonishment – fantastically! 8/10 positive reviews is according to me a great success of the band – and bear in mind that Polish critics are not really inclined to praise! 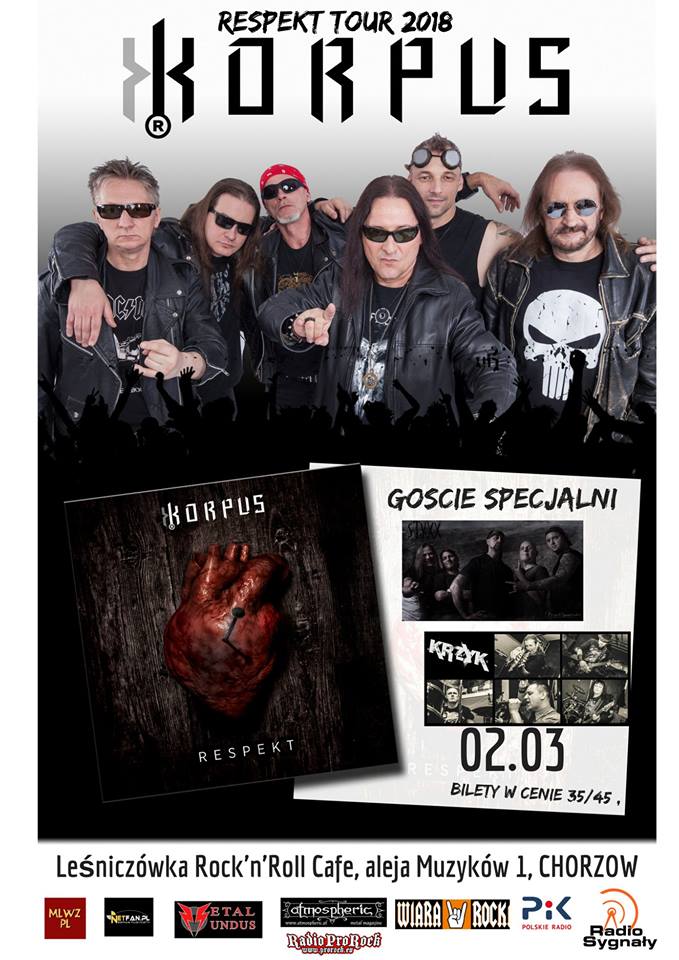 What is the meaning/story behind the name of the album Respekt and the album cover?
The message is really clear. We are approaching the things we do in music with great respect. We also highly respect our audience, fans and the so called music industry. We’ve come back after more than two decades to a totally different reality that surrounds us right now – a different world.
The band started in the early 80’s. Please tell us how the band got started then. And how it was in that time to be a hardrock/metal band in Poland?
The band was formed at the beginning of 1981. I am the only member from the first lineup but Marek ”Czaszka” Balaszczuk (guitar) and Cezary „Dziadek” Łostowski (bass guitar) have played with us since 1982. After we won Jarocin ’83, Wiktor ”Witek” Pietrzykowski (gitara) joined us. He has also been with us since then. So, basically, the stem of the band comprises of people from the 80s. The new people are Piotrek ”Mucha” Muszyński (drums) and Włodek ”Mariano” Tyl (keyboards). Magnificent musicans who have our genes and the same rock blood in their veins.
And if you ask about those times – well, it was rather good playing then, because communists wanted to keep the more and more frustrated youngsters occupied. I feel  it was the reason they gave a green light to rock music. However, this idea was also something that put an end to the regime. When they banned playing it was too late for them – people had already felt freedom and tasted free music and simply didn’t want to let it go.
The 80s were the best years for Polish rock & roll. A lot of great band and music were created then. Right now it’s pretty good, too. Though it was then when the stems and the canon of Polish rock music were formed.
Why the band stopped/quite in 1990? And what happened with the bandmembers?
When commies imposed restrictions on rock concerts, it turned out that it was impossible to live without them anymore. However, the music market in Poland was crawling, so we set up our families and children appeared. We all started to work. And Poland was changing. Freedom approached but with great effort on the part of Poles. Some of us, like Czaszka, played further but not only rock. I was composing, producing music – even the pop one! I do this nowadays, too. And Marek, he has his second band BE LAZY! In 2011 I recorded with my other band, JOHANE’S, an album titled „SKAZANI NA MIŁOŚĆ” – fourteen ballads out of which a few landed pretty high on radio charts. When it comes to the rest of our “golden” lineup, Paweł „Shenker” Koziej has died, and our drummer. ,Nazim ”Ziutek” Alijew, plays blues in LESTER KIDSON band.
Who came with the idea to disband the band after so many years..? And are all the old bandmembers involved in the ‘new’ Korpus?
That was my absolutely crazy idea a bit supported by a journalist Sławek Orwat form the PolishCzart in the UK. But from the beginning I just knew that it would work out because I had a particular plan about what and how to play. However, it wasn’t still that much easy. But that’s great that our old band-guard had enough rock balls to bring it back to life.
And when it comes to the members, I’ve already embarked on this issue in the previous question.
Can you tell us your opinion or thoughts about the music/rock scene then (80’s) and now Anno 2017/2018.. how it has changed etc..?
I would say that generally rock & roll hasn’t changed that much. Time, people and equipment have changed. And, of course, access to music, too. The internet is might right now. A lot of weird varieties of rock have appeared – giving, both, advantages and disadvantages to the genre. But the true rock should sound like the first CDs of LED ZEPPELIN. I was brought up on these pieces and maybe on WHITESNAKE’s, too.
I’ve been lately on their concert in Poland – what a kick! High-end, as always! Recently, I’ve also seen GUNS ‘N ROSES, AEROSMITH and SCORPIONS and in addition AIRBOURNE – well, no questions! That’s the real rock & roll that I’ve always loved and the one that would stay in my heart for ever – just like the nail hammered in the heart on our cover.
By the way, my friend from New York, graphic designer – Adam Lipton, has created this project after listening to the demo version of our album. That’s what he has heard! Bull’s eye! Good job! 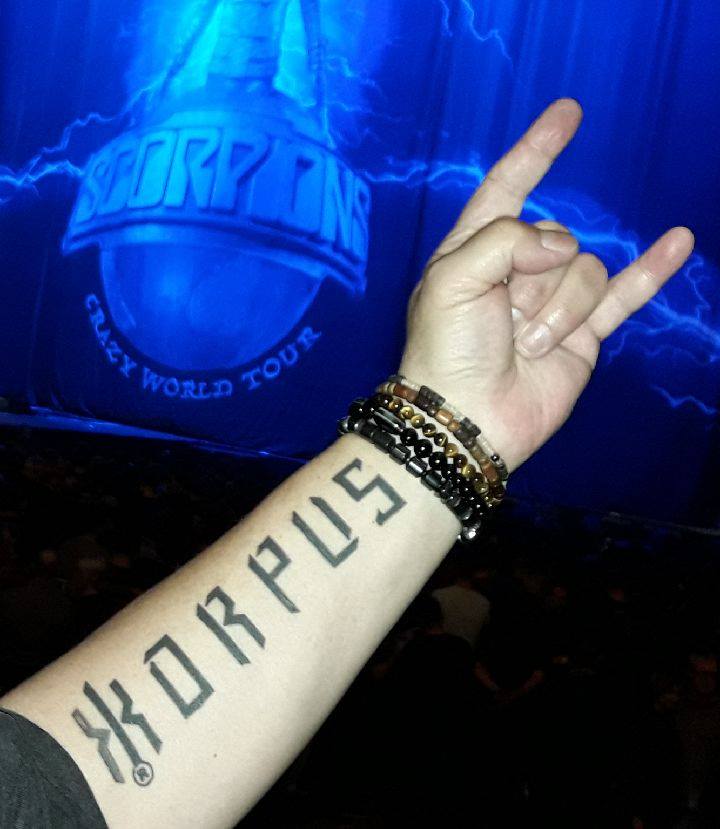 What are the future plans for Korpus?
The future is highly promising. Finally, we have great management and an excellent and experienced manager, Monika. We have a concert tour ahead of us to promote album “Respekt” throughout Poland.
A lot of media events, interviews, clips and chances for giving a few concerts abroad where our album – although recorded in Polish – receives great reviews, even behind the ocean! Also the content for the second album is almost finished so I suppose we’ll start recording it the late autumn. Maybe we’ll prepare something in English, too – there are such proposals. We’ll see!
Where the readers can find all the info about the band?
All the information is available on our Facebook Fan Page. You can also check us on our website, which is currently under construction, www.korpus.net.pl. But you can find there all the necessary links to our nets and management.
Are you guys also involved in other bands or projects?
Yeah, of course! We have our own bands or we organize music sessions, but Korpus is still the priority. It’s our rock home and family.
What about singing/lyrics in English? Or it will be just staying in Polish?
In the upcoming time we will try to start a recording of a few pieces in English. I’ve recently cooperated in the development of another CD, produced for the European market, with Robert Sieradzki, a brilliant translator of rock lyrics (the band BELIEVE). So I think it will cause no trouble to us. My English is not that bad, all in all, though I have a trace of an Egyptian accent! Ha! Ha!
Do you see any ‘trouble’ or ‘problems’ for the band to get attention in ‘the west’ with the Polish lyrics, or the music will/can touch the people of good will, rather then have the lyrics in English?
Rock & Roll is understood with heart and soul but lyrics are important, too.
A good translator will cope just fine with my texts – I’ve already done that! Our Slavic melodics can be smuggled even to those English “noodles”. It will be fine!
What are some of your and the bandmembers favorite artists or bands..?
To me it’s absolutely DAVID COVERDALE and WHITESNAKE. And when it comes to bands, that would be for sure something from the rock canon of the 80’s or 90’s. Though me and my mates sometimes also like to soak into different music types like Chili Out, Jazz or Symphonic Rock. You have to listen to different genres because it opens in your mind new spheres of musical sensitivity!
Do you have any last word to the readers of Bonavox.nl   ?
Rock regards to all the readers of Bonavox.nl!
We encourage you to listen to our new album “Respekt” and of course to see our concerts! And these are always a thrill ride so don’t miss on them!
Keep fingers crossed for us because, as someone has counted, we are together over 250 years old! But don’t worry, we’ll manage! Janusz „JOHAN” STASIAK  & KORPUS.