Till Lindemann, the lead singer of Rammstein, has released his first solo album as Lindemann. 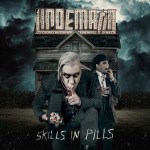 Lindemann has sold over 17 million albums via Rammstein. His band Lindrmann is Till Lindemann with Peter Tägtgren of Pain and Hypocrisy. Tägtgren is also the Metal producer for Amon Amarth, Dimmu Borgir, Sabaton, Children of Bodom and Cradle of Filth.

‘Skills and Pills’, the debut album for Lindemann will be released through Warner Music, Lindemann just released his first single ‘Praise Abort’. Check it out below: