The Irish rocker and his band U2 are dealing with the death of their long-standing tour manager Dennis Sheehan, who passed away earlier this week of a suspected heart attack. Dennis, who was in his late sixties, was found unconscious in his LA hotel room just hours before the band had to take to the stage.

“Death is nothing we ever get used to. It never gets easier to lose someone great,” Bono told British newspaper The Sun. 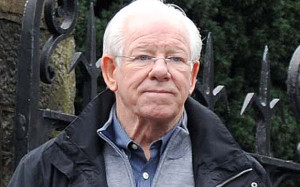 The sentiment was shared before Dennis passed, with Bono reflecting on the death of U2 drummer Larry Mullen Jr.’s father just before the band started their Innocence + Experience tour. The recent passing of legendary blues star B.B. King had also caused the band to reflect on death.

However, news of Dennis’ death came as a complete shock, with the band, including The Edge and Adam Clayton, paying tribute to their colleague and friend at Wednesday night’s California show.

‘Being in U2 is not just about the four of us in the band,’ Bono continued to the publication.

‘There’s a huge team we’ve worked with for a long time. So when Larry returned home for his dad’s funeral, we stayed getting ready for the first night. But Larry had a peace about him; he had made peace with his father.’

The 55-year-old has always channelled his emotions into his song writing, and says many of the group’s tracks reflect personal experiences.

Bono doesn’t think you ever get used to death.

Bono himself went through losing his father during a U2 tour, which means he’s been able to support Larry.

‘I am lucky to still be with these men that I met when they were boys and we still kick sh*t out of each other and it can be unpleasant at times. But if I am stuck, I still turn to them. We all turn to each other,” he said.