Behold! The Monolith is a stoner/doom metal band from Los Angeles and will release their new album ‘Architects of the Void’ this coming September 29th.

‘Architects of the Void’ follows uit the in 2012 released ‘Defender, Redeemist’ album and will debut the new singer Jordan Nalley.

Guitarist Matt Price gives a update what we can expect from the new album: 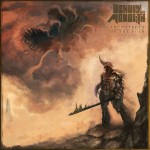 It’s a relatively dark album, which is probably fitting. A few of the riffs and ideas had pretty much coagulated right before Kevin’s accident, and most of the others were colored by it, so yeah it feels kinda heavy and dark to me. I hope I don’t sound like a high falootin’ artisté, but it felt personal for me and Chase, so it wound up being more than just stringing riffs together, ya know? That being said Cas and Jordan came in and kicked ass and brought their own stamp to the sound. So it’s a bit different, but I think it captures the essence what Behold! The Monolith is all about!