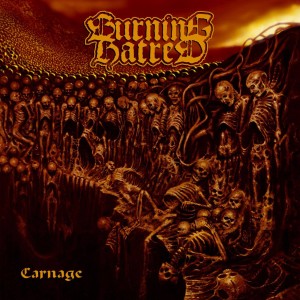 Burning Hatred plays old school death metal, in the heavy, rhytmic and rancid way with a thick dark nasty edge. Inspired by the Swedish and Dutch death metal scene from the 90’s era. The music is full of brutality and groove.

Started in the fall of 2002 by Martin (guitar) and Rien (drums) with the addition of Bram (bass) and Erik (vocals) the first line-up was completed. In the 2005 a self-titled 4 track demo was recorded and released. The demo was in the vein of early Unleashed, Grave, and Entombed. Positive reactions where given, bringing the band more shows in The Netherlands and Germany. A second guitar player was added to the line-up for more brutality. In the end of 2005 Bram quit and was replaced by Edwin.

Before making new recordings, Erik was replaced by Arnold on the vocal spot in 2006. A new 3 track demo, called “Apocalypse Of The Dead”, was recorded in the beginning and released in the summer of 2007. Before the end of the year there was a change again, Koen was brought in for the vocal duties. In the first month of 2008 two gigs were played with Dismember. Later that year the band played as a support for Onslaught and shared the bill of an indoor festival with Vomitory and Obscura among others.
In the beginning of 2009 4 members left, leaving Martin the only remaining member. The search for a new line-up began and was found in the summer that year. It consisted of Gerben on drums, Steve on guitar and later on vocalist Tone joined. New tracks for an upcoming release were written. In the spring of 2010, Bas completed the line-up on bass.
In January 2011 the band started the recordings of a new MCD called “Unleashed”. It was released in may of the same year through Herrie Records Inc. It was praised by the underground press for being heavy, filthy and appealing.
In the spring of 2012 Tone quit because of health reasons, Carl from Massive Assault helped out on vocals live.
In 2013 preparations for their first full-length are being made and will be recorded during the summer together with their new vocalist René.

After the summer the ‘Carnage’ will be unleashed upon you on CD, vinyl and cassette.