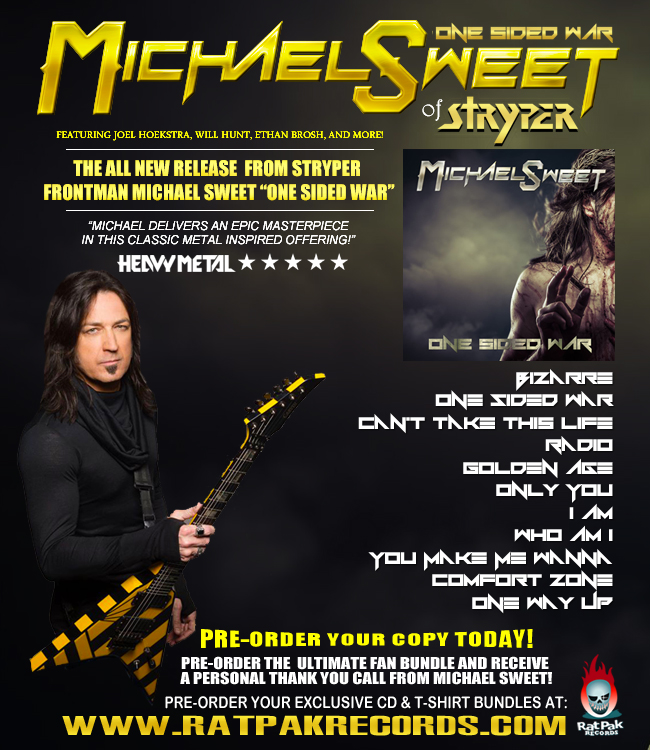 In what promises to be Stryper front-man Michael Sweet’s most intense solo release to date, “One Sided War” showcases a full plate of hard rock & classic metal riffs from start to finish. One Sided War marks Michael’s 7th studio solo album and it clearly proves that he is still at the very top of his game! “I’ll tell you about it”, says Michael, “Musically it’s my heaviest solo album. It’s not thrash metal but there are definitely some songs on there that will pop out at you. There are some songs that have a bit of the Iron Maiden / Dio feel to them, as well as some songs that have a little bit of a Van Halen influence to them. It’s a very guitar-oriented, hard rock/metal album with lots of melodies and hooks!”

Surrounding himself in the studio with Whitesnake guitarist Joel Hoekstra, Evanescence drummer Will Hunt, bassist John O’Boyle and East Coast shred-master Ethan Brosh, Michael began creating what would soon be known as “One Sided War”. Michael states “Originally I planned on showcasing my own guitar playing; I was going to do it all myself, but once I brought Joel & Ethan into the picture, things began to take a new direction and I am very happy with what we have accomplished”. Says Ethan Brosh about working with Michael, “He’s one of those guys who have always been at the top of their game and has just never lost it and for me to be a part of this is very special“. Joel Hoekstra comments “Michael and I actually go back to my time in Night Ranger when we opened for him when he was playing with Boston. Ever since then we’ve just been kind of collaborating and this is sort of a natural evolution getting to play on a few songs on his solo album“.

The fast and furious opener “Bizarre” ignites the album’s pace with it’s lightning fast riffage, soaring vocals and blazing guitar solos. Tracks like “Can’t Take This Life”, “One Sided War”, “Golden Age”, “I Am” and “Comfort Zone” keep the metal fires ablaze, while tracks like “Radio”, “One Way” and “You Make Me Wanna” bring the hard rock vibe to the forefront . “One Sided War” features only one ballad, “Who Am I?”, a heartfelt, passionate song that reminds us of the softer side of Michael’s talents. Closing out the disc is a bonus track; it’s a different version of the song “Can’t Take This Life”, a duet with Michael and 16 year old up-and-coming female vocalist Moriah Formica. If you are a fan of Michael Sweet / Stryper or a fan of classic Hard Rock & Metal in general “One Sided War” is an absolute must have, you won’t be disappointed! Official release date is August 26, 2016