Home
Interviews
Rick Altzi, born in Helsingborg, Sweden started his career at a very young age in the band AtVance in 2007. In the meantime he worked with great artists from Accept, King Diamond, Mercyful Fate, Pain of Salvation and of course he is the leadsinger in Masterplan. 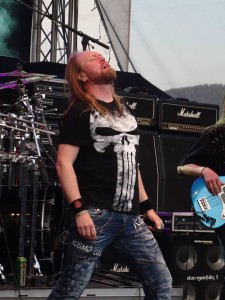 Dear Rick how are you doing at the moment?
I’m  fine thank you, a lot of festivals but it’s summer 😉
How was it to play at the Dokk’em Open air festival in The Netherlands?
Great, I was a bit surprised that we were playing a festival with so many “hard” metal acts. But the crowd was great and so was the wine, I had a good time.
Any other festivals, concerts you are playing in Europe?
We’ve done a bunch already, Slovakia, Finland etc and we have a few left, Spain, Germany.
After the south America tour in October we will be back touring in Europe in November.
You are from Sweden, can you tell us briefly something about your past and how you got to sing in Masterplan?
I’m as you mentioned from Sweden and I played bass until I 2007 all of a suddenly got offered to sing in a band called AtVance. I had been doing a lot of backing vocals as a bass player and took the chance to do lead vocals when I got the opportunity.
AtVance and Masterplan are on the same record label and me and Roland had been in contact since Jorn left the first time. In 2012 he called me and asked if I was interested to join Masterplan and that how it is, don’t regret it it’s a great bunch of people to play with!
What are your own favorite bands?
Ohh there’s so many, Dio, Whitesnake, Ozzy, Sabbath, Bad Company, Thunder, Malmsteen the list is long, not only metal but also bands like Saga, Toto and many more.
Can you tell us something about the DVD: “Keep your dream Alive”?
It’s late, should have been finished 😉 No seriously it contains footage from several shows. The main concert is Masters of Rock, bit there are extras from USA, China and Wacken in Germany, it should be out any time now, artwork looks amazing.

How things are going in the Studio, I read on the internet that the band is busy with a new Masterplan album? any news about this?
Just as we are doing this interview I’m on my way to Spain for another festival, in Spain we also are having a songwriting session, a lot of songs are ready but we always looking for new good songs so we’re trying even more ideas.
This autumn/winter I’m in the studio to record the vocals so it should be available first quarter 2016.
Do you have a last word to the readers of Bonavox Magazine?
Just want to thank you for this opportunity to talk to you and to all the fans that has been reading this!! Thanks!!