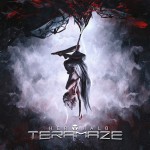 Teramaze returns with their 5th full length album after completely grabbing the attention of the underground Thrash and Prog-Power Metal fans with their 2012 release “AnhedoniA.” Teramaze blends amazingly tight and speedy syncopated guitar/drum riffs and rhythms, with melodic hard vocals, for a very unique brand of metal. Creating a Testament & Tool meets Pantera & The Police in a dark sci-fi video game vibe. Teramaze burst out of Australia in 2012 and received well-deserved critical acclaim worldwide with their release “AnhedoniA”.

‘Her Halo’, the new Teramaze album which will be released by Music Theories Recordings (Mascot Label Group) on October 30.

Teramaze. Used in the metric [decimal] system as one trillion and billion fold or a million million. The metric symbol for tera- is T. Greek term meaning ‘marvel’ with the sense that this is a huge and marvelous quantity.” A maze is a complex tour puzzle in the form of a complex branching passage through which the solver must find a route.