It took a while till I got this interview back from this band from Brasil..But finally..here it is… 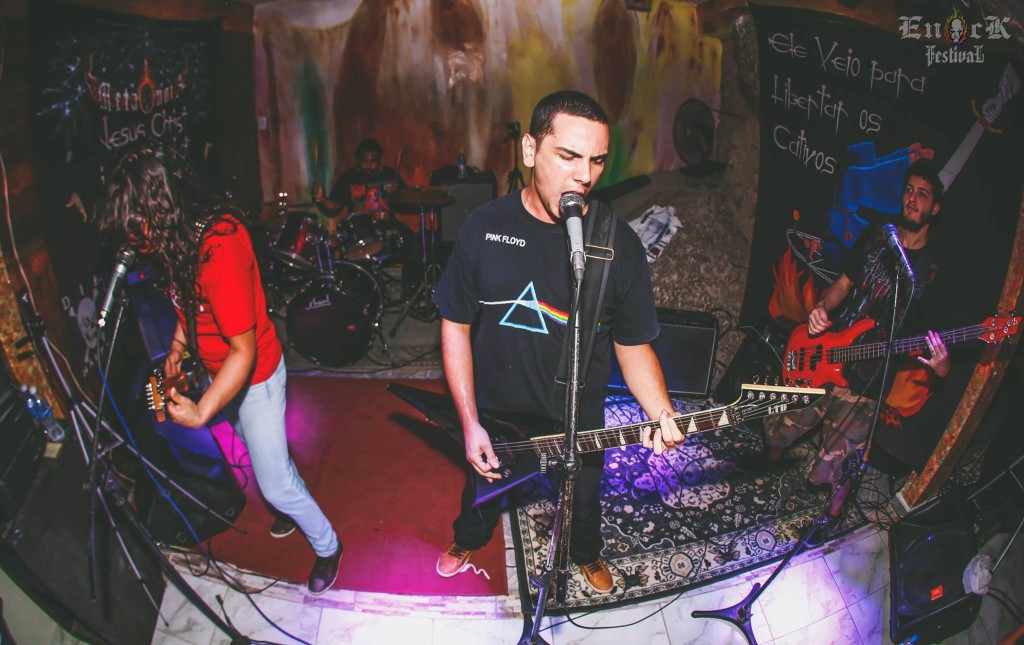 Hello friends, you are from Rio de Janeiro, Brazil. Please tell us something about the city and how the metal scene is overthere…?

Metalic salutes, friends! Thanks for this oportunity. Well, Rio de Janeiro was a good place for living, but questions like urban violence, total public transportation’s deficiency, discrepancy and decadence of public system of cheers and education, done this city a little interesting and efficient place for living. Another dificulties like caotic traffic and high inflation difficult more a good living here. This is without mentioning our public security who don’t works, its bankrupt and obsolete, like  our State Government. That is, you pay expensive to living here and there is a risk to stolen or killed, it’s complicated.

Our Metal Scene is in a good moment, with a lot of nationals and internationals shows in the last years. The underground events in this city as risen in this four, five years. Some weekends had two, three shows in one day only. This did not happen years ago. Like the shows, the number of bands rises here. Summing up, this is a good time for underground.

How is your city before the Olympic Games. I mean how you see it from your perspective or that from the city-citizens..?

In true, we don’t have good expectations for this, nothing will be improves here after the Olympic Games. The problems will be continue, the government don’t think in your people. So much that our public cheers, education, security, all be bankrupt and doesn’t works. They invested all our money in this Olympic Games; meanwhile the hospitals and public schools are in crisis, the public servants of this two sectors don’t receive their wages. All knows, Brazil don’t have structure to host Olympic Games, and no one big event, sadly, this is the true.

Sadly, all money what enter in our public safes it’s for benefit only for our rules and not for us…

Please tell us about the start of the band? And the significance of your name.

Hating Evil began in 2008, with Thiago Bernardo “Madguitar” in guitars and I (Vinícius Sousa) in drums. I and Madguitar have a band of thrash/death metal called War Factory before, but sadly did not work. For this motive we decide to create another project facing to Oldschol thrash metal, without modern trends, and we form Hating Evil. Sadly, Madguitar is no longer in our band, the formation as changed across the time, we stayed two years in hiatus, returning again only in 2014 with the release of our EP “Rotten Inside”. The name “Hating Evil” becomes from a song of Vengeance Rising called “I Love Hating Evil”, we found this name very strong, interesting and very different, combined well with we want.

How do you describe your music, and which other bands inspired you…? 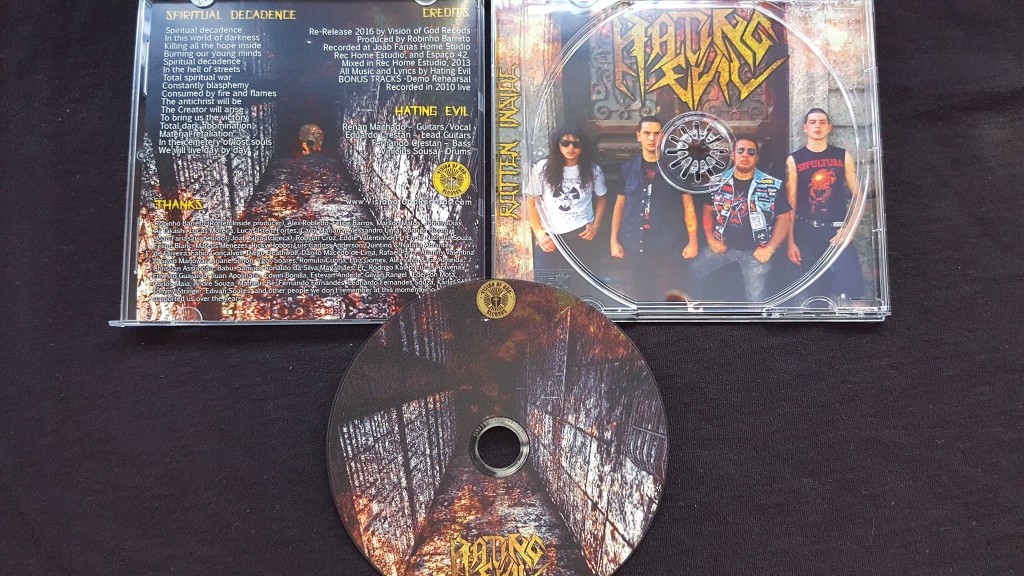 Please tell us something about, the album: “Rotten Inside”. Your music, lyrics, the writting process etc..?

Well, “Rotten Inside” is a critic for religious hipocrisy. Some people think they is very more “holy” who anothers, but living in a corrupted life, with luxury, promiscuity, etc; using their religious convictions to disguise who they really be. They can use suit and tie, and walks with Bible under the arm, but like says our song: “The skin is intact, but you are rotten inside!”, and this is the people who do not take it seriously their religious life, want to be one thing inside the church, in temple, but becomes another people out the church. This critic can be extended for our actual society, and also some activists who fights for freedom, fight for minorities, but their will be full of prejudice and intolerance who do think different, etc.

About the writting process of our CD, the songs was written for some time, some songs since the beginnings of Hating Evil, and we was played alive most of all. We delayed almost two years for record why we did’t had money and in this time the formation was I and Renan only. We began the record in 2011 and finished in 2013 due the instability of formation and the lack of money, sadly.

How the album was received by your fans and the press?

See, “Rotten Inside” gives a good acceptance ever, but she rises from this two years after the release. The EP was released originally in 2014 for USA’s Martyrdom Records, in CD and cassete formats, and in some months all be sold out. In Brazil, Lex Metalis Records (actual Lex Metalis Assessoria) released a limited edition with 33 copies + bonus tracks with the objective of spread the band and the label, and the copies was sold out again. We did another copies in this same year with the objective of spread the material, and sold out quickly. Next year, the Thai label “Roots Active” re-released “Rotten Inside” in cassete format, limited for one hundred copies, and sold out quickly again.

In March 2016, “Rotten Inside” was re-released again, from USA’s “Vision of God Records”, with new insert and cover art, remastered material and bonus 2010’s demo tracks, and the quality it was awesome.

Rotten Inside ever was a well sold material, for this we never be complain about. We had some reviwes in rock and Heavy Metal sites, ever with good rating and critics. 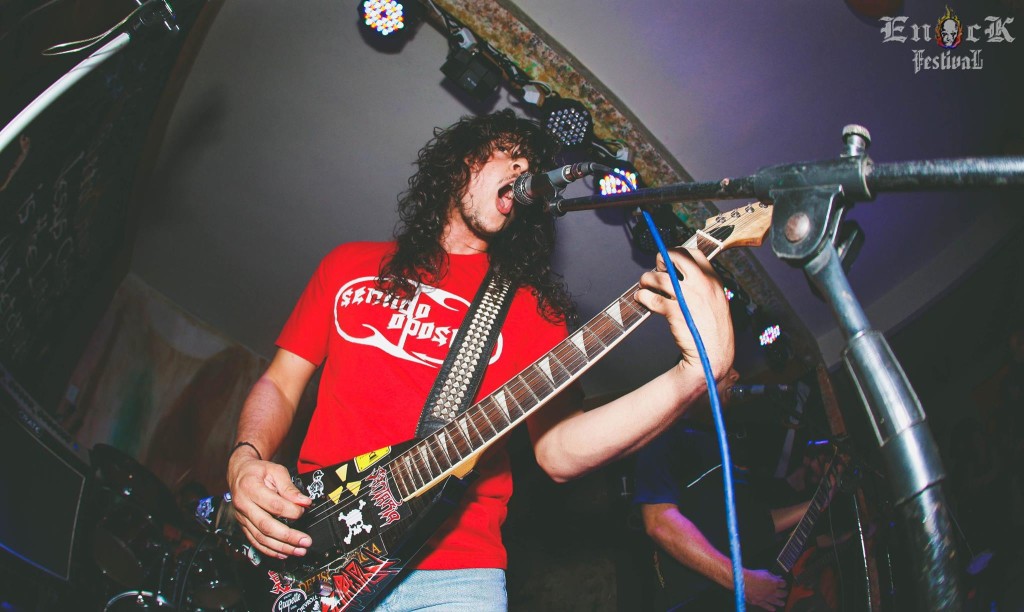 Where we can find all information about Hating Evil?

Do you guys have any plans to come over to Europe someday, somewhere?

Yes, we have plans for do a tour in Europe someday. Germany, Netherlands, England, Spain, this is some places where we would like to play, this is our dream, but this will be planed with advance. We are seeing the opportunity of begin a tour from Argentina in December 2016, apparently everything is already to begin our tour over there.

Do you have any last words to say for the readers of Bonavox?